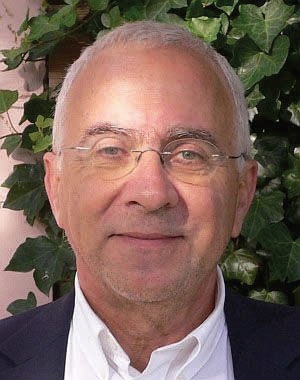 On the invitation of the Editors of this new Newsletter, I report briefly on the Triple Helix Conference organized at Stanford University in July 2011. In the meantime I may have forgotten some details, but the gist of the conference of course is still clearly in my memory.

The venue at Stanford was spectacular for the purpose of a Triple Helix meeting and the theme of the conference accordingly was chosen as “Silicon Valley: Global Model or Unique Anomaly?” The organizers, Marina Ranga and Henry Etzkowitz, have been deeply involved in researching Triple-Helix relations in Europe when they were previously based in Newcastle, UK. Etzkowitz (2002) provides the history about the other “unique anomaly”: the Massachusetts Institute of Technology in Cambridge, MA. Marina Ranga is known for her studies about gender in Triple-Helix relations.

The program reflected these perspectives. The opening theme session and many other contributions discussed the Silicon Valley example. Plenary sessions were devoted to themes such as regional innovation systems, and gender equality in technology and innovation. Paper sessions were organized in parallel and were often of high quality. A lot of empirical research in this area is awaiting its presentation and publication. The old plan to organize a Triple Helix Quarterly as a venue for such publications is still under discussion; the start of this new Newsletter itself is hopefully a first step in this direction. Although organized at a very late moment, the number of delegates was more than 250 with more than a quarter from the US, with large delegations from Europe (37%) and Latin America (23%). In total, thirty-seven nationalities were among the registered audience.

A special position in such meetings is given to keynote addresses. First, in remembrance and honour of the late Christopher Freeman (who died in 2010), his former coauthor Carlota Perez gave a general vision about the challenges of innovation in knowledgebased systems and the current crises. She emphasized that consensus formation and leadership are crucial to innovation trajectories and maintaining a competitive edge. Annelee Saxenian, the author of a famous book about Silicon Valley and Route 123 in the Boston Area (Saxenian, 1996), warned in another keynote against generalizations from single case-studies: contexts matter and successes cannot be copied (although perhaps sometimes they can be imitated). Other ecosystems of innovation may be differently shaped such as the many experiments (e.g. about hightech zones in China) amply demonstrate. She pleaded for reflexivity about the specifics of innovation systems. The Stanford experience, for example, is also colored by the engineering environment and venture capital available in this region sometimes more than elsewhere.

At the final session, W Brian Arthur provided a keynote about the theme of his new book “The Nature of Technology” (Arthur, 2009). Two insights are pieced together: that novel technologies arise by combination of existing technologies, and that therefore existing technologies beget further technologies. In the book, Arthur elaborates this to a theory of technology evolution, but during the presentation the emphasis was on carefully selected historical examples.

The meetings in themselves were feastly. For most of us, this was a first (or perhaps second) meeting within the halls of fame of this university and the Stanford environment. For those who attended, the history of Stanford and its unique role in Silicon Valley have become engraved as a social text because of the continuous enthusiasm of the speakers from the region for the successes of the joint ventures, licenses, spin-offs, etc.

We did not hear so much about failures but, alas, that is not what one expects, and one can always return to one’s home university to see more anomalies. This seems not the place to elaborate on these issues, but let me contribute to the discussion by providing some relevant figures for Stanford University based on the database of the Association of University Technology Managers (AUTM) in Figures 1 and 2, respectively.

Figure 1 shows that Stanford University has steadily increased its number of US patent applications and patents issued. Thus, Stanford does not suffer from “the end of the Bayh-Dole effect” found by Leydesdorff and Meyer (2010). However, the total revenue income from licensing varies greatly from year to year. Figure 2 indicates that the number of new startups – as reported to AUTM – seem to be stabilizing during recent years. 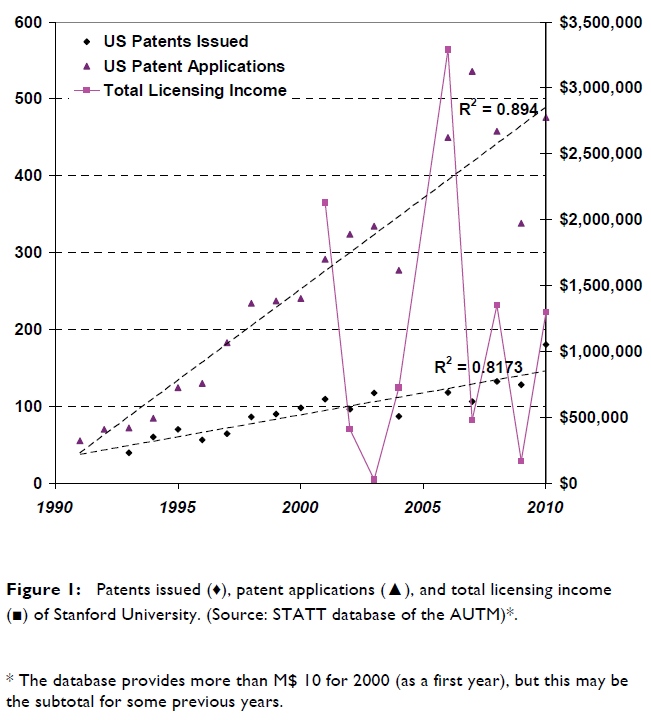 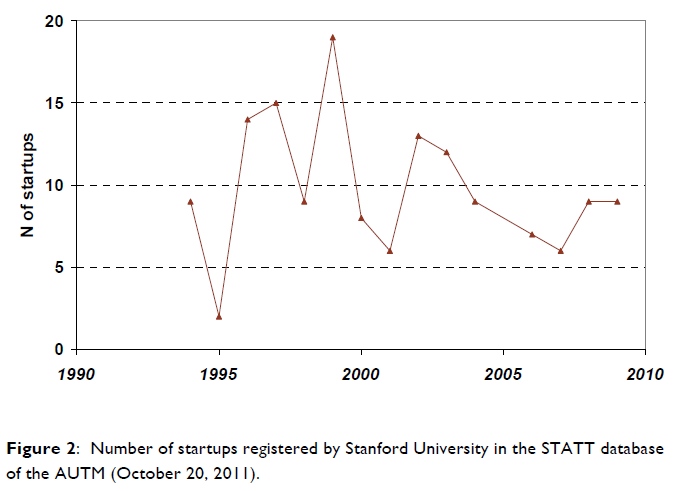 The above is not meant as a criticism of the meetings; I just could not suppress my inclination as a scientometrician to make the argument more quantitative. Henry Etzkowitz is currently preparing a paper (provisionally entitled “Regional Innovation Clusters: Is Silicon Valley a Global Model or Unique Anomaly?”) about the institutional history of Stanford’s industrial relations.

Thus, the “Triple Helix of university-industrygovernment relations” as a theme provides a rich meeting ground. The strength of the meetings has been from the very beginning the topic which can be discussed across disciplinary boundaries. Perhaps more than in other meetings, industrialists were presenting and participating in this one. The academic participation tends then to be a bit cornered into the parallel sessions, but that is ok as long as there is enough time for the scholarly exchanges at this level of detail.

The next meetings are envisaged in Bandung (Indonesia), August 8-10, 2012, and in Tomsk (Russia) in 2014. (A meeting in 2013 is still under discussion). The Indonesian delegation gave us a presentation on the attractions of Bandung, and the further planning of this next meeting. (See at www.th2012.org)