Women comprise half of the US labor force, a quarter of the STEM (science, technology, engineering, and mathematics) workforce, but hold  less  than  10%  of  the  patents  in  this  country.   While  the number  of  women  applying  for  patents  is  generally on  the  rise, a persistent gender gap continues with regard to technology transfer and  entrepreneurial  activity.   Several  recent  studies  inadvertently bring attention to this problem.

A  study  to  be  published  in  the  Journal  of  Management  looked  at hypothetical  IPOs  and  found  that  second  year  MBA  students undervalued the company, and offered the CEO less compensation if they believed the company was being run by a woman. Another study recently published in the  Proceeding of the National Academy of Sciences  found  that  an  applicant  for  a  lab  manager’s  position  was seen  as  less  competent,  a  less  desirable  hire,  less  worthy  of mentoring,  and  offered  a  lower  salary  if  the  application  had  a woman’s name on it rather than a man’s. A current study is looking at the likelihood of technology licensing managers to encourage an entrepreneur  to  disclose  his  or  her  technology.   The  preliminary results suggest  that the  officers  are  more  likely  to  encourage the entrepreneur if an XY is involved in the chromosomal arrangement.

These are all examples of implicit bias, a key factor contributing to attrition of  women  from the  STEM  pipeline.   The  Association for Women  in  Science  (AWIS)  promotes  best  practices  to  retain women  in  academia  and  industry.   Technology  transfer  is  an increasingly  relevant  topic  in  this  national  dialogue  as  well  as  a measure  of  productivity  in  some  fields.   The  Association  of Women in Science (AWIS), operating at the nexus of science and gender,  seeks  to  identify  reasons  why  women  patent  at  a  lower rate, and identify ways to increase the number of women in tech transfer initiatives to help women fulfill their intellectual potential and so help sustain American economic competitiveness.

To  do  this  we  interviewed  tech  managers,  past  Association  of University  Technology  Managers  (AUTM)  presidents,  innovation experts,  women  entrepreneurs,  innovation  outreach  program coordinators, policy experts, and patent attorneys. We concluded with  a  policy  symposium  of  leaders  representing  a  variety  of stakeholder  groups  to  generate  a  meaningful,  result-oriented dialogue,  pulling  together  an  audience  slightly  outside  the  typical cross section of stakeholders in this space.

Joan  Herbers,  PhD,  Professor  of  Evolution,  Ecology,  and Organismal Biology at Ohio State University, and a past president of  AWIS,  initiated  the  proceedings  by  explaining  why  AWIS  is uniquely  positioned  to  help  facilitate  a  dialogue  on  technology transfer. She introduced Jim Woodell, the Director of Innovation and Technology Policy at the Association of Public and Land-grant Universities,  who  served  as  moderator  for  our  the  panel.   Mr Woodell  offered  a  brief  history  of  what  limitations  American innovation faced prior to the introduction of the Bayh Dole Act in 1980. He focused on the achievements which came out of federal labs  and  early  tech  transfer  programs  like  those  that  emerged from  the  University  of  California  system  and  the  University  of Wisconsin and explained that, because universities had no rights to their own intellectual property, they had very little incentive to develop the ideas to their full potential. 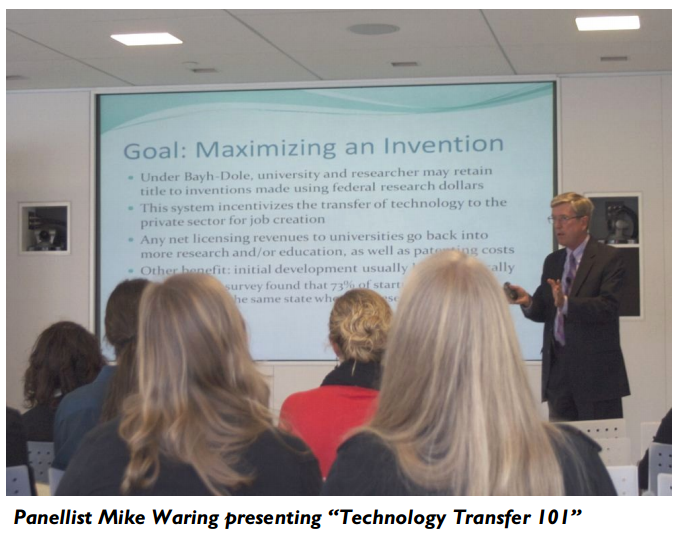 Michael  Waring,  the  Executive Director  of  Federal  Relations  for the University of Michigan, gave an overview of the importance of technology  transfer  to  universities  and  the  American  economy. He explained the overall process of taking an idea and turning it into something functional so that the public can benefit from the research  their  tax  dollars  have  supported.   A  key  point  is  that, according to the 2011 AUTM report, 73% of the startups began locally. The significance of this is crucial to looking at the issue of free agency being proposed in the Startup Act 2.0. If innovators can  go  to  other  places  to  develop  their  technology,  local universities and economies stand to lose out.

Following  along  those  lines,  Lila  Feisee,  Vice  President  of International  Affairs  for  Biotechnology  Industry  Organization (BIO),  delved  into  the  technology  transfer  opportunities  as  it applies  specifically  to  the  biotechnology  ecosystem.   As  most  products  that  benefit  consumers  come  from  the  lab,  the importance of legislation which impedes that process is detrimental to the whole process. She therefore touched upon the importance of policies which protect the intellectual property (IP) innovators and companies that provide an incentive to produce therapeutics despite  the  high  cost  of  trial  and  error  to  develop  them.   The lawsuit the American Civil Liberties Union brought against Myriad Genetics  over  the  legality  of  patenting  gene  products  will  likely continue to be an evolving story as genome sequencing becomes cheaper  than  the  tests  for  individual  mutations,  and  a  greater interest  in  people’s own  medical  information  must  be  reconciled with disclosure of such patented information. In tandem with that is  the  bigger  story  about  how  to  protect  IP  internationally  and incentivize  therapeutic  treatments  for  third  world  diseases  like Malaria,  where  the  economic  enticement  is  low  because  the affected population has minimal purchasing power, as well as those like Niemann-Pick disease that affect a very small population. Both of these issues have yet to be resolved but may have repercussions for tech transfer offices at universities.

Mark  Crowell,  Associate  Vice  President  for  Research  at  the University  of  Virginia  (UVa)  and  Executive  Director  of  UVa Innovation,  offered  a  terrific  ground  level  perspective  on  the challenges and opportunities for university tech transfer programs. Crowell  spoke  candidly  about  the  challenges  of  creating  a  tech transfer  office  (TTO),  focused  solely  on  revenue  generation  in comparison  with those that  exist  to  support the faculty  but  may not be as lucrative. A program may develop one homerun product that  is  incredibly  profitable,  but  the  odds  of  that  are  small. Therefore,  it  may  be more  advantageous to  engage the  broadest innovative  potential  possible,  but  that  is  not  without  challenges too. This raises additional questions about meaningful metrics of success for a TTO, and how to best do that while at the same time venture capital and angel investment funds have shrunk. For UVa this has meant shifting towards engagement in the whole economic development  spectrum,  taking  a  single  idea  and  turning  it  into  a licensable product or a startup company, but this then means many other  financial  hurdles  have  to  be  overcome.   To  cultivate  an ecosystem  of  success,  they  have  begun  implementing  other initiatives  to  try  to  increase  participation.   One  way  they  have worked to do this is by changing tenure standards as it relates to translational  research,  putting  technology  and  idea  disclosure  on researchers’  radar  more  consistently.   Another  way  has  been to facilitate networking to a greater degree than in the past by pairing UVa employees with others who have entrepreneurial experience and  can  help  develop  the  best  business  model.   Crowell,  too,  is thinking  big  picture  as  national  boundaries  for  collaboration  and financing continue to dissolve. If international players are interested in  funding  American  ideas,  and  vice  versa,  perhaps  the  problems with international IP regulation will begin to be resolved through international grassroots solutions.

To  conclude the  panel,  an  expert  in  innovation studies  currently engaged  with  the  Human  Sciences  and  Technologies  Advanced Research  (H-STAR)  Institute  at  Stanford  University,  Henry Etzkowitz,  PhD,  talked  about  an  alternative  model  for  university education to increase innovative success. Instead of perpetuating the emphasis on “serial entrepreneurs” and the linear process of disclosing an idea once it has sprung, Etzkowitz suggested ways to encourage engagement in the entrepreneurial space through earlier educational opportunities. This alternative system gives participants exposure to the skills needed to be successful in entrepreneurship by  emphasizing  the  interface  between  academics,  industry,  and business.   It  also  increases  the  breadth  of  participation  because many who may be hesitant to approach a TTO without a tangible idea  to  disclose  might  be  interested  in  developing  skills  in  this space. It winds up being far more inclusive than exclusive to the benefit of both the university and the undergraduate or graduate students and employees.

Our  recommendations  at  the  conclusion  of  the  panel  are  that TTOs  should  track  gender  and  ethnicity  of  those  that  come  to disclose  their  technology,  gain  patents,  license  technology,  and develop  startups,  and  this  information  should  be  included  in AUTM’s annual reports. Second, TTOs employees should undergo implicit  bias  training.   Last,  to  best  serve  their  own  interests  by tapping  into  the  greatest  possible  pool  of  entrepreneurial participants,  as  well  as  to  achieve  the  greatest  possible  financial returns, TTOs and academic institutions should examine successful models of engagement currently in place at other universities, and adapt  them  to  fit  their  own  needs  and  populations.   Some  have suggested  that  conflicts  have  arisen  in  places  where  the  TTO  is already financially successful and the leadership perhaps fails to see the  need  to  adapt  with  the  changing  times  to  offer  more opportunities than those currently available. However, to remain competitive  with  other  undergraduate  and  graduate  training programs that do start to adopt programs with more options for experience in this space, these institutions may be forced to adapt to  a  changing  model  of  education  or  risk  losing  out  on  the  best intellectual capital overall.