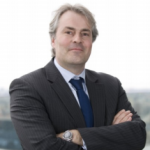 The  Amsterdam  Area  economy  is  thriving,  even  in  these  difficult economic times.  2.2 million  people  generate  91  billion Euro’s  in added  value.   Together  with  Mainport  Rotterdam  and  Brainport Eindhoven,  the  ‘North  Wing’  (of  which  the  Amsterdam  Area  is part)  represents  80  per  cent  of  the  economic  activity  in  the Netherlands.   The  Area  bounced  back  from  the  recession extremely well, and stands a strong chance of continuing to grow as an internationally-esteemed region for business. The strength of the Amsterdam Area in a nutshell:

Together,  these  are  trump  cards  that  allow  the  Area  to compete  in  the  Premier  League  of  Europe’s  regions,  maybe even  directly  below  London  and  Paris,  and  above  competitive regions such as Madrid, Frankfurt, Milan and Brussels. It is vital that  the  Amsterdam  Area  remains  active  amongst the  leading regions in Europe. As an economic centre that is attractive to international  companies,  as  a  dynamic  region  with  sufficient employment  and  as  an  innovative,  sustainable,  and  creative region,  that  leads  the  way  in  developing  new  products  and services.

The Amsterdam Economic Board Joins Forces

Local  and  regional  governments,  knowledge  institutions,  and  the business  community,  all  see  the  opportunities  of  the  Amsterdam Area.   Concluding  a  long-term  process  to  intensify collaboration, they joined forces at the end of 2010 to determine a united course for the area’s development. The Amsterdam Economic Board was established  to  facilitate  this  process.   The  Board  is  a  stable, ambitious  managerial  collaboration  in  which  all  parties  work together  to  chart  a  successful  course  for  the  area  and simultaneously  cooperate  to  implement  strategy  and  bundle financial resources.

By focusing on innovation and competitive potential of seven main sectors in the region, as well as on several generic aspects of the business  climate,  the  Board  plans  to  significantly  improve  the regional economy. 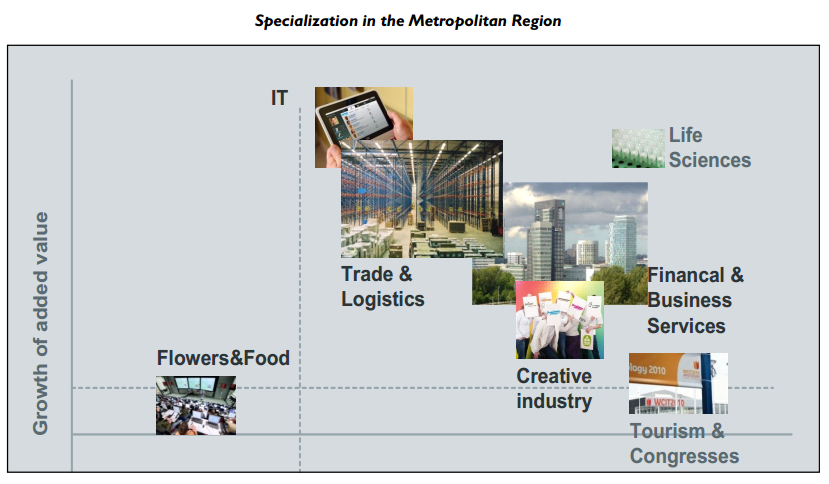 Working together on  knowledge  and  innovation  the  Board views the Amsterdam Area (as part of the ‘North Wing’ area) together with the Eindhoven and Rotterdam regions as the most important driving  forces  of  the  Dutch  economy,  and  is  therefore  keen  to address its responsibility fully. By facilitating collaboration between the  Amsterdam  Area,  national  government  and  other  successful regions  in  the  Netherlands,  the  Board  wishes  to  contribute  to maintaining and strengthening The Netherlands’ ‘earning capacity’. The  Board  wants  to  invest  in  the  correct  drafting  of,  and interaction  between  all  policy  agendas,  alongside  joint implementation of the agendas where this offers added value. 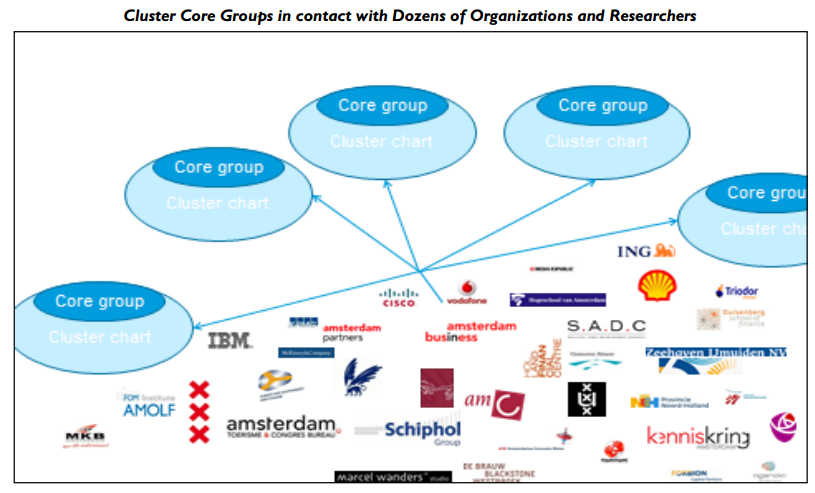 Spearheads of the Amsterdam Economic Board

The Board has established core groups for each of the seven main sectors in the Amsterdam Area: ICT/e-science, Creative Industry; Financial  and  Business  Services;  Food  and  Flowers,  Tourism  and Congresses; Logistics and Red Life Sciences. Each core group has drafted a development strategy, which has resulted in the creation of a wide range of innovative and connecting initiatives which are given structure and priority by the Board.

The  Knowledge  and  Innovation  Agenda for  the  Amsterdam  Area was finalised on 24 June 2011. The spearheads of the Board can be outlined as follows:

With  the  support  of  ICT  and  the  Creative  Industries,  the ambition  of  the  Amsterdam  Area  is  to  realise  pioneering innovations in various fields. The chance to stand out can be found  in  the  crossovers  between  ICT  and  the  Creative Industries  and  other sectors,  and  as well  as  in  the  application potential of smart  systems.  Another  area  in  which the  region can excel is creative and e-Humanities research in fields such as e-Tourism and Smart Logistics. Full advantage should be taken of this potential through, for example, the creation of a Creative Campus, as a significant follow-up of the Amsterdam Smart City project (awarded by the EU) and by effectively strengthening the position  of  the  Netherlands  with  regard  to  data  storage  and processing. The Amsterdam Area plans to position itself as the world’s first World Smart Capital and to support this claim with a  wide  range  of  events,  congresses,  international  exchange programmes, and knowledge development programmes.

Developments  worldwide  prove  that  the  Amsterdam  Economic Board  is  working  on  the  culture  of  innovation  using  the  right model,  which  is  the  Triple  Helix  in  economic  development involving academia, industry, and government in partnership playing the same end-game of economic growth.

In  working  with  the  Triple  Helix  model,  we  are  inspired  by  the knowledge  created  in  Amsterdam  by  Professor  Loet  Leydesdorff from the University of Amsterdam, one of the founding fathers of the  Triple  Helix  concept.   He  has  written  many  articles  on  the subject.

Success  will  be  experienced  if  the  Amsterdam  Area  can  identify opportunities for growth and effectively leverage limited resources and focus energies around the important innovation assets that are driving the opportunities.

The  Seamless  Connections  innovation  program  is  aimed  at establishing seamless linkages in and between logistical chains, the further  digitizing of  information,  and  ensuring  the  efficient  use  of the (multimodal) infrastructure. Seamless Connections will literally and  metaphorically  speaking  remove  the  ‘fences  and  obstacles’ between actors in the logistical chain.

Seamless Connections is an example of the Triple Helix in which the business sector, knowledge institutes, and governments, work closely together to innovate the logistical chains in the Amsterdam Metropolitan Area, and accordingly remove obstacles in the chain. Besides  the  significant  role  of  ICT,  it  is  of  importance  to  adjust existing rules and traditions. In particular, the turnaround time of logistical  processes  can  be  shortened  by  organizing  paperless transfer in the links of the sector.

We  believe  strongly  that  shared  knowledge  is  the  key  factor  for innovation.  Therefore,  we  foster natural  curiosity  and  eagerness to learn more. We endeavour to strengthen and make better use of  the  knowledge  infrastructure  in  order  to  leverage  the Amsterdam Area to an even higher standard of prosperity and well-being. 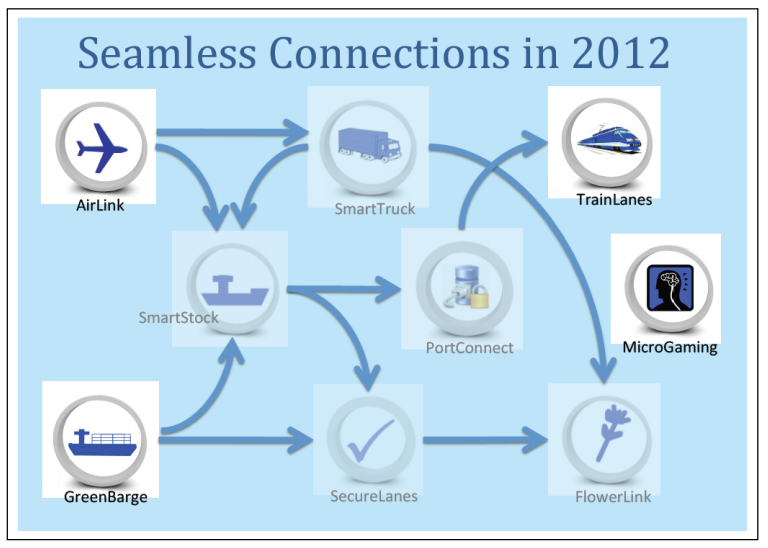