Located  800m  above  sea  level  and surrounded  by  mountains,  Bandung  has  a mild  temperature  ranging  from  22-27 degress Celcius.  Bandung, a city of around four  million  inhabitants,  is  known  as  the City of Education.  Many famous state and private  universities  are  located  here. Bandung Institute of Technology, the oldest and the best institute of technology in the country,  was  selected  to  host  the  10thTriple  Helix  International  Conference,  in cooperation  with  the  State  Ministry  of Research and Technology, and the Ministry of  Education  and  Culture  of  Republic  of Indonesia.

Unlike  previous  TH  conferences,  Triple Helix X 2012 was held in cooperation with the  Indonesia  National  Technology Awakening  Day  (Hari  Kebangkitan Teknologi  National  or  Hakteknas)  held from  8-11  August  2012,  by  the  State Ministry  of  Research  and  Technology, Indonesia. In parallel  with  the conference during  the  week  there  was  a  national tehnology  innovation  exhibition,  a  carnival of  technology  products,  much  discussion, and  a  talk  show  on  innovation  to  name  a few.

The  Conference  in  Bandung  attracted nationwide attention and received national press  coverage  due  to  the  presence  of Indonesian  Ministers  as  well  as  the strategic  positioning  of  the  conference  in the  National  Technology  Awakening  Day. Many  reporters  from  the  national  mass 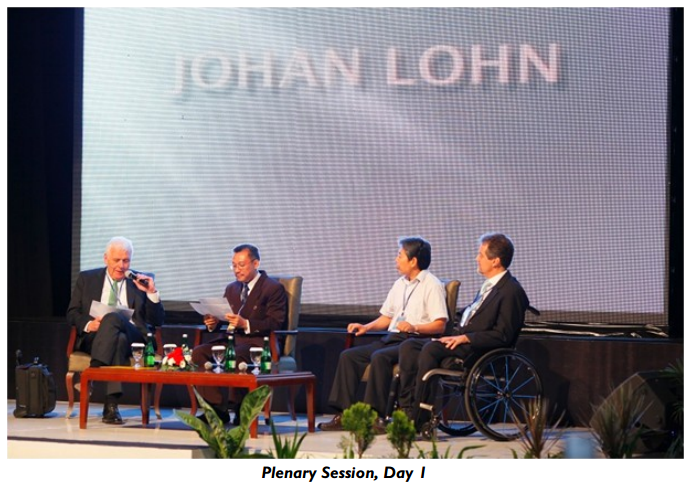 1.2  Grouped Sectors: BusinessIntroducing R&D activities as the gauging factor for the management of innovativeness in businesses.

The  development  of  innovation  infrastructure in the following sectors:

3.  Success Stories in Enhancing the Relevance of the Triple Helix Model

Creating  live  policy  issues  that  address specific  aspects  of  how  the  Triple  Helix c onc ept  an d  academia/bus in ess /government  interactions  can  spur  the innovative  capacities  and  capabilities  of developing countries. The objective was to stimulate  discussion/dialogue  and  policy development  that  would  bring  to the fore the  role  innovation  can  play  in  the economic  growth  and  success  in developing countries.

The  Conference  received  the  full  support of  the  Indonesian  Government  and academia.   Considering  the  importance  of the  Triple  Helix  issue  for  innovation  and development  in  developing  countries,  the Indonesian government, as represented by the  Indonesian  Ministry  of  Research  and Technology,  had  the  initiative  to  hold  TH X  in Indonesia.  After  winning  the bidding process  to  hold  the  conference  in  2012, the  Ministry  of  Research  and  Technology (www.ristek.go.id), in cooperation with the Directorate  General  of  the  Higher Education  Ministry  of  Education  and Culture  (www.dikti.go.id),  and  the  School of  Business  and  Management,  Bandung Institute of Technology (www.sbm.itb.ac.id/en/), prepared to organize the event. The organizing committee, effectively working a year before the conference, was always in contact  with  and  received  guidance  from Triple Helix Association board members.

(School of Business and Management)

The  School  of  Business  and  Management was  established  in December  2003,  and  it is regarded as one of the most progressive Business  Schools  in  Indonesia  with  its innovative  curriculum  and  leading  edge studies  with  multidiscipline  area  of expertise.   The  school  aims  not  only  to provide  quality  degrees,  but  also  practical experience in line with educational goals so that  students  can  approach  issues  in  life with  unique  and  fresh  perspectives.   The Graduate  School  of  Business  Management offers four educational programs:

SBM‐ITB  is  not  a  newcomer  in  the  Triple Helix  community.   SBM-ITB   is  a  leader  in research  development  and  innovation  and conducts  collaborative  research  on  the Triple Helix, such as research in knowledge management  by  Professor  Jann  Hidajat Tjakraatmadja.   There  are  other  divisions such  as  the  Center  of  Innovation, Entrepreneurship,  and  Leadership  (CIEL), the Consultancy and Continuing Education (CCE),  and  the  Indonesian  Business  Case Center  (IBCC).   In  November  2009,  in Indonesia,  SBM  ITB  was  named  as  “The Best  Business  School  2009”  based  on independent  surveys  conducted  by  SWA Magazine.

In  formulating  the  direction  and  priority development  of  Science  and  the preparation  of  national  development strategic  policy  Science,  the  Ministry  of Research  and  Technology  is  supported  by the National Research Council (DRN). 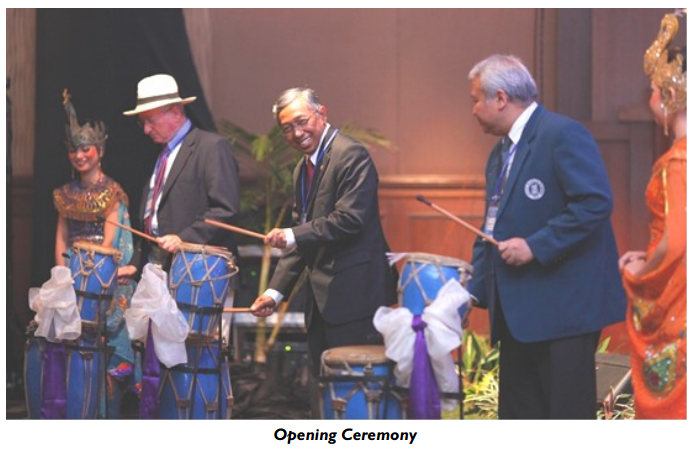 On  June  2009,  His  Excellency  Dr Kusmayanto  Kadiman,  the  former  State Minister for Research and Technology; Dr Teguh  Rahardjo,  Deputy  Minister  for Research, Science and Technology Program ‐  RISTEK,  and  Dr  Marzan  Iskandar, Chairman  of  the  Agency  for  the Assessment and Application of Technology ‐  BPPT,  attended  the  Ministerial  Panel  of the  Triple  Helix  VII  Conference  in Glasgow,  Scotland.   Their  attendance  led to  the  10thTH  Conference  being  held  in Indonesia.

The day-to-day program of the Conference was as follows : 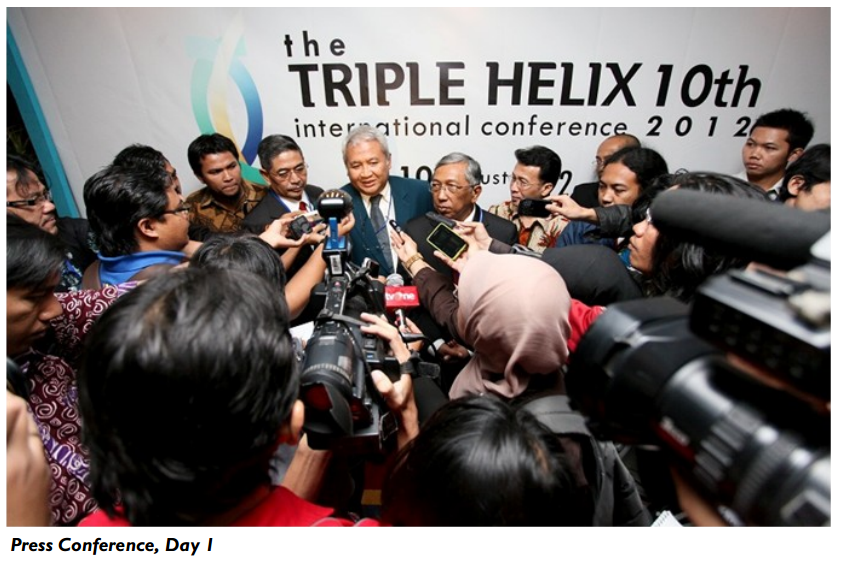 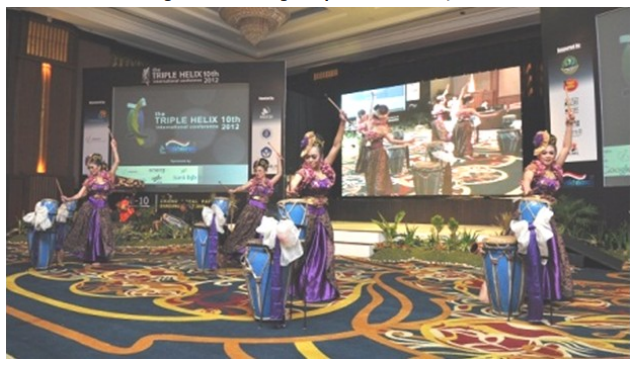 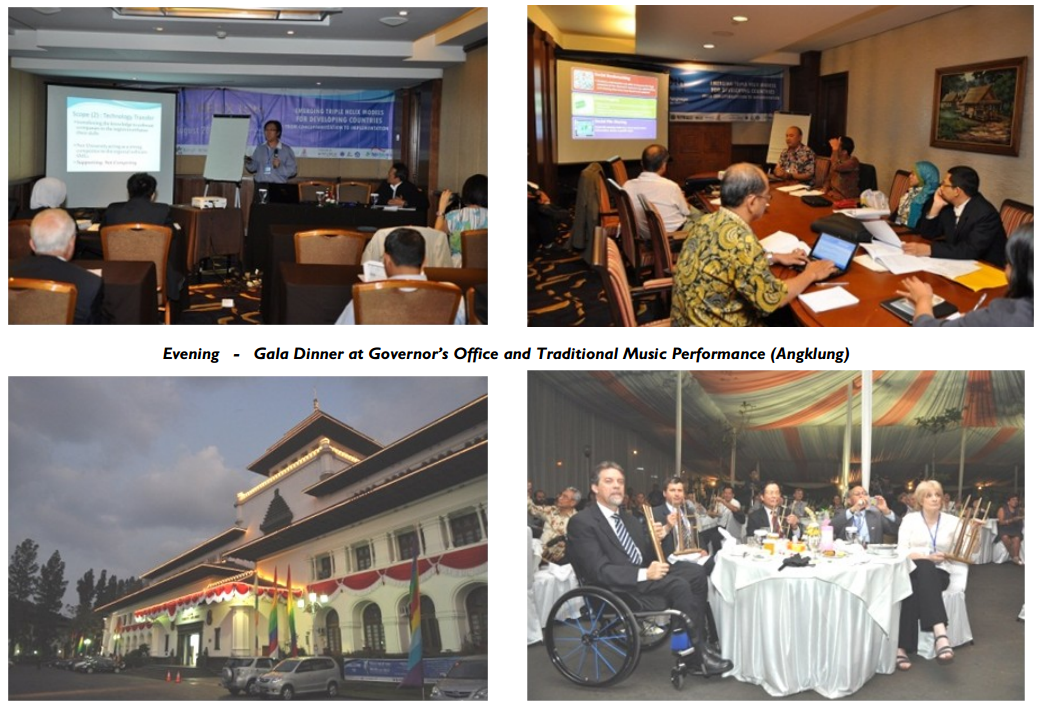 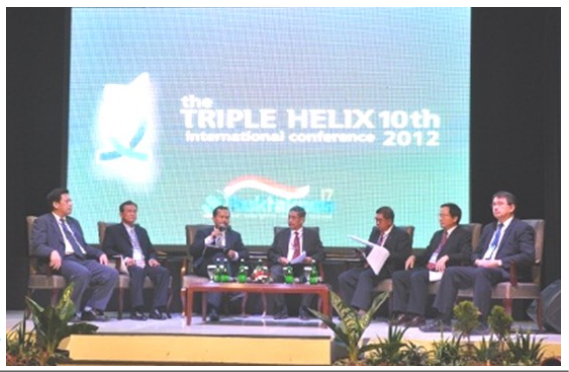 From the presentations and discussion, ASEAN countries are now more serious in developing their national innovation system that in turn it will have significant impact for realizing the ASEAN dream to become one community by 2015

The  morning  session  of  day  three  closed  with  the  Triple  Helix Association General Assembly, which discussed the progress of the THA  in  terms  of  increasing  the  number  of  THA  members, simplifying  payment  of the membership fee,  and  substantiating the content of the THA Helice Newsletter.

It was also announced that the Triple Helix Conference in 2013 will be held in London, UK. The Conference will be hosted by the Big Innovation Centre, in cooperation with the University of London’s Birkbeck College, and the University College London. 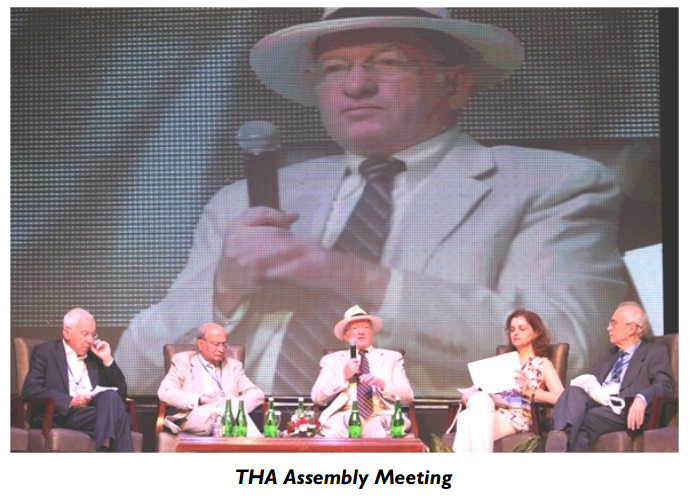 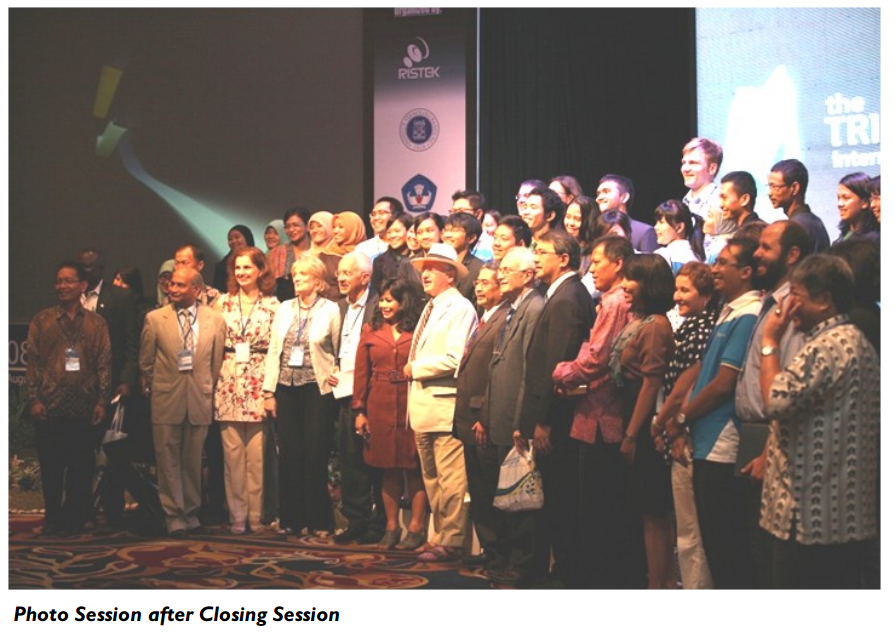 The conference was attended by more than 250 participants from thirty  countries  (Table  1).   The  participants  consisted  of  paper presenters,  authors,  and  conference  attendees.   During  the Conference,  114  papers  were  presented  in  sixteen  parallel sessions.

Countries with highest number of representatives were Indonesia, Brazil, Thailand, Russia, and the UK.

TH  X  2012  provided  not  only  an  academic  conference  on  triple helix  issues,  but  also  complementary  programs  as  novel  features, e.g. a satellite image exhibition, satellite events, interactive cultural events, and conference mobil app. As THC X 2012 is perceived as a  high  level  event  that  could  attract  a  lot  of  attention  and international  participation,  some  organizers  (our  partners)  agreed to  hold  meetings  and  an  exhibition  as  an  integral  part  of  the conference program. 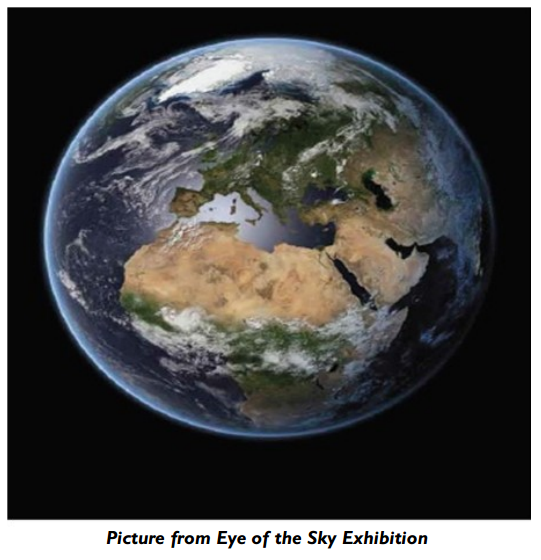 (2)     In  close  cooperation  with  the  local  TH  organizers,  the Regional  EU-ASEAN  Dialogue  Instrument  (READI), supported and implemented a session on “S&T Cooperation and  Innovation  Systems  in  ASEAN”  as  part  of  this  Triple Helix Conference’s program.

The session focused  on the question of how regional and biregional S&T cooperation can stimulate innovation  involving government,  universities,  and  industry,  particularly  in emerging  economies  and  developing  countries  within ASEAN.  Perspectives  from  ASEAN  and  the  EU,  on innovation theory and an actual private sector innovator with a  research  background  were  presented  and  put  up  for discussion  in  front  of  an  ASEAN  policy-maker  audience  as well  as  the  wider  public  of  Conference  participants  (from government, academia, and industry).

(4)     A gala dinner combined with interactive traditional music and dance performances gave a memorable experience during the conference.

(5)     A conference  mobile  app  was  provided for the  participants to  ensure  access  to  all  necessary  information  regarding  the plenary,  parallel,  and  satellite  events,  including  their corresponding  locations,  information  about  the  papers,  and authors,  schedule,  etc.   This  app  could  be  accessed  by  any mobile devices including smartphones, tablets or notebook.

Papers  presented  at  the  Conference  by  registered  authors  are published in the Conference Proceeding and are available online at the conference website, www.th2012.org. Also, thirty-five papers are  published  in  Elsevier  Provedia  Social  and  Behavioral  Science (S+BS) indexed by Scopus, and eight to ten papers are still in the process  of  being  published  in  the  Journal  of  Industry  and  Higher Education (IHE).

Much  appreciation  was  received  from  the  Conference  delegates. One remark from Professor Jose Manoel Carvalho de Mello made during  the  THA  Assembly  Meeting,  “  …  it is the best Triple Helix conference ever!”,  a really encouraging comment that conclude our more or less a year of hard work.

Our  special  thanks  for  the  support  provided  to  the  conference goes to our sponsors: ASEAN-EU Year of Science, Technology and Innovation  (Yosti),  German  Academic  Exchange  Service  (DAAD), German  Aurospace  Centre  (DLR),  German  Federal  Ministry  of Education and Research, PT Telkom Indonesia, Majalah Energi, and Bank BJB. We are also grateful to Bandung Heritage, for helping us arranging cultural events.

We  would  like  to  express  our  appreciation  and  gratitude  to Professor Wawan Kadir, Vice Rector of ITB, Professor Sudarso K W,  Dean  of  SBM-ITB,  Professor  Togar  Simatupang, Vice Dean  of SBM-ITB, and Dwi Larso, PhD for their support. The  conference  would  not  have  been  successful  without  the collaboration from the RISTEK team, therefore, heartfelt thanks go to  Professor  Amin  Soebandrio,  Mrs  Nada  Marsudi,  Mr  Amir Manurung and the other RISTEK team members. Special thanks also to Professor Tariq Durrani and Sheila Forbes from the THA for  their  continuous  guidance.   Last  but  not  least,  thanks  to  all organizing  committee  members  who  worked  hard  and  smartly together to make the TH X Conference an unforgettable moment!