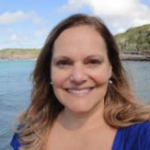 Federal University of the State of Rio de Janeiro – Unirio

Brazil covers an area of 8.5 million square kilometers, has a population of 196.7 million [1], and a Gross Domestic Product of US$ 2,425,052,000 billion [1]. It is organized as a Federal Republic, with twenty-six states, and shares borders with ten of the twelve countries in South America.

The country has abundant reserves of minerals, oil and gas, an immense river system for generating energy and transporting cargo, forest reserves, and a rich diversity of fauna and flora. The population is largely a mixture of the descendants of the indigenous people with Europeans, Africans, and Asians, and has developed a unique and rich cultural heritage. It is the only country in the region that has Portuguese as the national language.

The average number of years of schooling for the population is 7.2 years (IBGE, 2011). However, 4.3% of children of school age are not in school. There were fewer than 100,000 students enrolled in university level courses in 1960, but by 2005, the numbers had risen to almost four million.

The number of Brazilians with Internet access grew by 14.7% between 2009 and 2011, reaching 77.7 million people who are more than ten years old (PNAD, IBGE, 2011). One of the things that may have contributed to this increase was the rise in durable goods, such as computers with Internet access and mobile phones. During this period, the growth in accessibility was 39.8%. PNAD shows that 22.4% of the country’s 61.3 million permanent private households have a computer with Internet access. Brazil ended 2012 with 261.8 million mobile phone accounts and a density of 132.69 per 100 inhabitants (Anatel, 2012).

The R&D intensity is at about 1.6% of GDP (MCTI, 2010). This total includes public and private resources and is much lower than the OECD average. Approximately 2/3 of the costs of developing science and technology in Brazil are covered by public funding. About 80% of the research projects are developed in public universities and other institutions.

In 2010, the budget for the Brazilian Ministry of Science, Technology and Innovation amounted to approximately R$7.6 billion (£2.8 b). This includes funding for facilities and doctoral level training, but excludes state-level funding. The total number of researchers was 234,797 in 2010, distributed as: 7,667 – government; 188,003 – universities;41,317 – industry; and 1,013 – not-for-profit organizations.

The Lattes Platform is an information system for research in Brazil, maintained by the National Council for Scientific and Technological Development (CNPq), affiliated to the Ministry of Science, Technology and Innovation. Its central element is a freely-available database of the résumés of Brazilian researchers and professors, who are encouraged to keep their data updated. In 2012, of the 100,740 doctorates in the activities of research and teaching registered in the Curriculum Lattes database, 46% were women and 54% were men. The distribution of this total within the eight fields of knowledge recorded by the Brazilian government is: agrarian sciences – 9.98%; biological sciences – 12.79%; health sciences – 14.99%; mathematical and earth sciences – 14.46%; social sciences – 15.91%; applied social sciences – 9.53%; engineering – 9.38%; linguistics, literature and the arts – 5.89%; and information not provided – 7.47%

Brazil has one of the strongest scientific bases outside the OECD. Among developing countries, its scientists contribute more of the most-cited research papers than any other country except China and India.

Brazilian scientists published 32,100 scientific articles in journals indexed in the Thomson Reuters Science citation index in 2009. In 2011, 46.933 scientific articles were published in journals indexed in Scopus. As a result, the country is the world’s 13th-largest producer of scientific research. More than 90 percent of these articles were generated by public universities. According to Thomson Reuters, Brazil produced the world’s most cited article in 2009 (on medicinal plants).

The number of doctoral degree holders in Brazil in 2011 was 12,217. In the same year, the number of students that completed their academic master’s degree was 39,220, and professional masters numbered 3,610. The number of science PhDs granted has grown by an average of 12% per year over the last decade.

Evidence from Thomson Reuters indicates that the impact of Brazilian science is significant relative to global production in the following areas: Tropical Medicine (18.4% of world share), Parasitology (12.34), Agriculture (8.61), Oral Surgery and Medicine (8.19), Entomology (7.06) and Animal Sciences (6.49). Bioenergy is another important topic. The proposal is to network key academics in these areas, with a view to generating joint research proposals.

The total number of Brazilian patents filed and granted in USPTO grew 100% in the period 2001 to 2011, where patents filed rose from 219 to 586 and patents granted passed from 125 to 254 (source: CGIN / ASCAV/SEXEC/MCTI). In the period 2001-2010 the owners of the greatest number of innovative Brazilian patents are presented in the Table below showing the prominence of Brazilian universities: 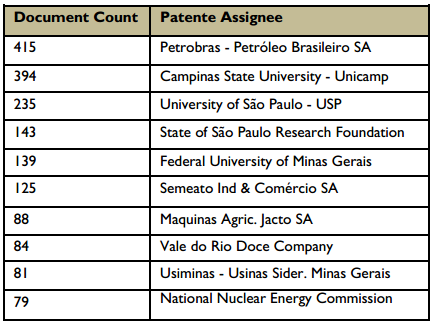 According to a study conducted in 2011 by Anprotec, in partnership with the Ministry of Science, Technology and Innovation (MCTI), Brazil has 384 incubators in operation, housing 2,640 companies and generating 16,394 jobs. These incubators have generated 2,509 enterprises, that today have revenues of R$ 4.1 billion and employ 29,205 people. The same study revealed another important fact: 98% of incubated companies innovate, and 28% focused on the local, 55% nationally and 15% globally. In 2012 there were 88 technology parks in the country, which represents an increase of almost 20% infour years (CDT / MCTI, 2011).

The Innovation Law, passed in 2004 and regulated in 2005, requires the Scientific and Technological Institutions to create “Technological Innovation Nuclei” (Núcleos de Inovação Tecnológica – NIT) that, among other things, will be responsible for the management of the technology generated by researchers, with special attention to decisions regarding intellectual property and licensing. In 2011 there were already 165 scientific and technological institutions that have implemented or were in the implementation phase of their NITs (source: MCTI, FORMIC 2011).