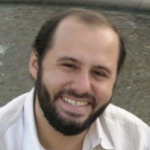 In this article we present a sample of interesting publications relating to innovation in the Brazilian and Latin American context. Two books deal with university-industry relationships in Brazil. The first provides a historical overview, and the second presents a sectoral approach, focusing on the pharmaceutical industry. A third book is a collection of contributions presented at the 2009 Seminar on the Triple Helix in the Latin America, organized in two main directions: knowledge generation, transfer and application; University-industry-government relationship, and the global crises challenges.

The fourth publication is a book detailing the results of a five year research project, entitled UniDev, which comprises comparative case studies in thirteen countries on the role of academic institutions in innovation and development. There is a chapter presenting the results of the Brazilian team’s research.

The final publication is a recent book which focusses on the Triple Helix in developing countries. The book presents interesting insights, especially the two chapters on the Brazilian experience: one analyzing the regulatory system that rules the relationship between universities and enterprises, and the other presenting a comparative study between Brazil and Mexico on the business incubator movement. 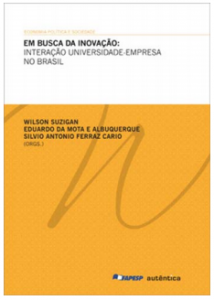 In search of innovation: university-enterprise relationship in Brazil

The capacity to innovate is vital to technological catching up processes which, in turn, depends on innovation systems for support. Universities and public research institutes, on the one hand, and firms on the other, are two of the most important components of the national systems of innovation (NSI). The interaction between them, along with government policies, are essential for NSIs to succeed in promoting economic and social development. This is the analytical background of this book.

The starting point is a historical overview of the development of higher education and research institutions in Brazil, as wellas a bird’s-eye view of industrial development in the country aiming to offer a long term perspective of the construction of scientific capabilities and the demand for new technologies by the productive sectors’. Scientific capabilities of institutions and interacting firms are studied on the basis of information from the Directory of Research Groups of CNPq, the National Council for Scientific and Technological Development.

Results discussed at national and regional levels and case studies show that there is cross-fertilization between science and technology, and that the role of universities and research institutes has been underestimated in the Brazilian NSI. 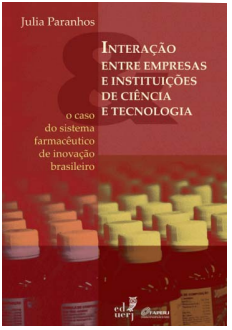 Industry-university interaction in the Brazilian pharmaceutical system of innovation

The field work consisted of interviews carried out with important actors in both countries, e.g. national and foreign companies, universities and research institutions, government institutions and other actors related to the sector. The interviews were mainly about the characteristics, motivations, obstacles and strategies to the interaction, but included other important topics related to the sector, as regulation, intellectual property, funding, public policies, the development of biotechnology and biodiversity, foreign trade and prospects of the future of the sector.

The book identifies a series of obstacles and motivations that would make industry-university interactions effective in their contribution to innovation. It elucidates controversial topics as well as contributes to the design of future public policies in the area. Because of the comprehensive nature of the work, the potential audience includes those interested in the Brazilian pharmaceutical sector, including researchers, students, businessmen, policy makers and people who work in the sector.

Proceedings of the Triple Helix in Latin America Seminar: Knowledge for innovation

The Seminar on Triple Helix in Latin America took place at the end of October, 2009 with over thirty speakers from Brazil, Argentina, Chile, Venezuela, Colombia, Peru and Mexico. The aim of the seminar was the discussion of the university-industry-government relationship from a Latin American perspective. The seminar was organized in two maindirections: 1) Knowledge generation, transfer and application; 2) University-industry-government relationship and the global crises challenges. There were seven panel sections discussing the two main themes of the seminar.

A compilation of the main conclusions of the seminar was published in 2010 in the book “Proceedings of the Triple Helix in Latin America Seminar: knowledge for innovation”. 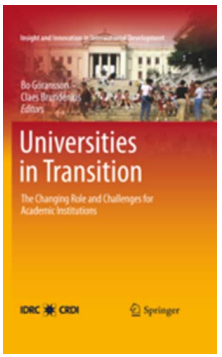 Universities in Transition: The Changing Roleand Challenges for Academic Institutions.

This book is the result of a research project focused on the analysis of the evolution of academic institutions in the contexts of innovation and economic growth and development, The research project, called UniDev Project, began in 2005 and was coordinated by the Research Policy Institute from the University of Lund in Sweden. The research involved twelve countries selected for coordinating the project – Brazil, China, Cuba, Denmark, Germany, Latvia, Russia, South Africa, Sweden, Tanzania, Uruguay and Vietnam-through teams national research.

The Brazilian chapter presents an overview of the national higher education system and it’s relation with innovation and development. The analysis is focused in the evolution of the Brazilian higher education system, and the assimilation of the research and innovation missions in it. Other topics such as inequalities of the system, its quality and new proposals for the future are addressed in the article. 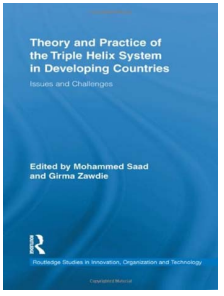 Theory and Practice of the Triple Helix Model in Developing Countries: Issues and Challenges

Theory and Practice of Triple Helix Model in Developing Countries contributes to the expanding literature on “triple helix” innovation – focusing on developing countries. The book is based on practical cases and experiences from Africa, Latin America and Asia. Relevant experiences and best practices from developed countries are also examined.  The book presents two chapters about Brazil: