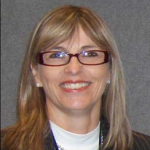 Past President, Brazilian Association of Innovation and Technology Managers (FORTEC)

Recent studies show that the role of universities and research institutes in regional innovation and development has required new forms to transfer knowledge produced by academic research (OCDE, 2003).

According to Etzkowitz (2009, p193), “we have gone from an era that was founded on the concept that research automatically translates into usage to an era in which the policies are continuously reinvented to reach that objective”.

In this context, measures have been taken by the Brazilian Federal Government towards encouraging the transformation of generated knowledge into wealth by means of effective actors, as recommended by the Triple Helix Model proposed by Etzkowitz and Leydesdorff (1996).

The Innovation Law (BRASIL, 2004), is a major landmark in this process. It offers incentives to innovation and scientific and technological research in the production environment, covering several support and motivation mechanisms for the constitution of national alliances, including the creation of facilities for public universities and research institutes to be able to share their laboratories, premises, infrastructure and human resources, with companies (including micro and small ones) and non-profit private organizations for incubation or research activities.

The Law also brings out the possibility of universities and research institutes signing contracts of technology transfer and the licensing of patents they own, and providing specialized consultancy services for companies.

The support for financial, material or infrastructure resources to serve Brazilian companies involved in research and development activities is included in the Law. Support to carry out research and development activities that involve technological risk to solve a specific technical issue or obtain an innovative product or process is included, as well as the implementation by development agencies of programs with actions aimed especially at promoting innovation in micro and small companies. As established by the Innovation Law (BRASIL, 2004), universities and research institutes are required to have a Technology Transfer Office (TTO), called Technological Innovation Nucleus (NIT) available to manage their innovation policy. The minimum competences of a TTO are:

As a consequence of this new role assigned to universities, issues of intellectual property and technologytransfer began to occupy the agendas of policy makers in universities, especially in public universities. Since then an increasing number of universities and research institutes began to integrate the national Intellectual Property (IP) system by means of patenting and technology transfer activities, spreading the culture of innovation, increasing the awareness of the importance of protecting research results and bringing forth the need to introduce institutional policies for intellectual property. One of the results of those measures was the sharing of economic benefits with academic researchers. As an outcome of these actions, a greater number of universities joined the system: from 2000 to 2004, 47 academic institutions were identified as applicants for 784 patents. In 2005 alone, after the Innovation Law, 323 applications were filed by universities, showing significant growth in the number of institutions participating in the IP system (Ritter dos Santos and Mello, 2009). Figure 1 shows the evolution of university patenting from 2007 to 2011, indicating a growth of about 450% compared to 2005. 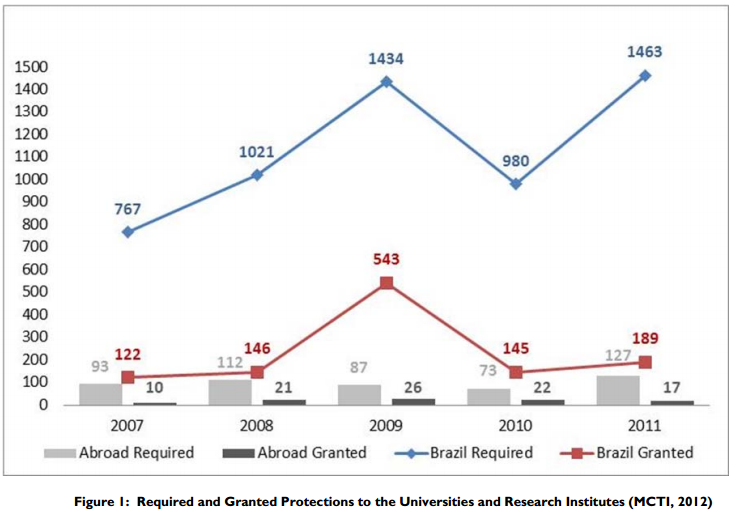 In 2011, the 144 countries that are part of the Patent Cooperation Treaty (PCT) requested the registration of 181,900 patents, an increase of 10.7% compared to the 164,316 patent applications in 2010. The volume of requests was a worldwide record in 2011, and annual growth was the strongest since 2005, in spite of the unfavorable worldwide economic conditions according to the WIPO – World International Property Organization (WIPO, 2011).

In the same year, Brazil recorded a 17.2% increase in the volume of patents filed through the PCT with 572 requests compared to 488 in 2010, according to provisional data disclosed on March 5 by the WIPO. The result represents a significant improvement in the IP area performance, given that between 2009 and 2010, Brazil had recorded a drop of 0.8%. From 2007 to 2011, the country filed 43% more patents through the PCT, whereas worldwide growth as only 13.7% (WIPO, 2011).

However, it must be pointed out that even though the volume of Brazilian patents increased significantly, the participation of companies is still modest, with the main volume of patents having originated from universities and research institutes.

According to information provided yearly by the universities and research institutes to the Ministry of Science, Technology and Innovation, the number of TTOs in operation has increased significantly from 43 in 2006, to 176 in 2011 (Figure 2). 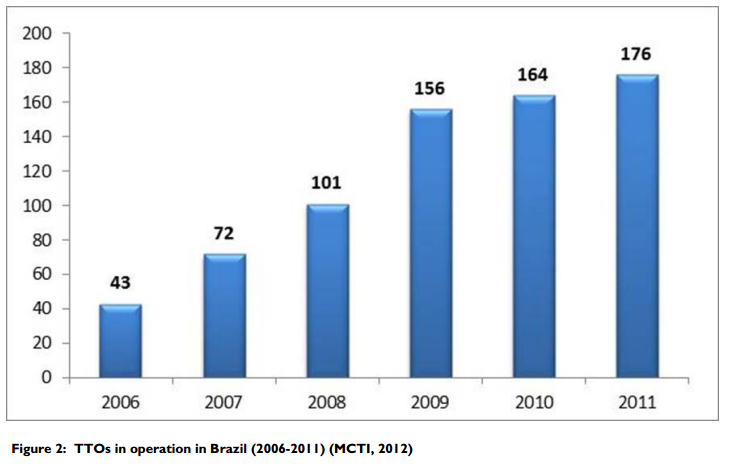 The enactment of the Technological Innovation Law influenced the creation of FORTEC – Brazilian Forum of Innovation and Technology Transfer Managers. Within such a favorable national background, FORTEC became a similar institution to the international organizations such as AUTM(United States), Réseau Curie(France), Praxis-Unico(United Kingdom), Red de OTRIs (Spain) and  RedViTec (Argentina), among others. Inspired by these international experiences, the creation of FORTEC on 1 May 2006, provided significant support to managers in carrying out their activities, as well as widening their representation at national level.

The actions set forth by legislation that regulates innovation in Brazil and TTOs evolution, representing instances of those actions, have shown promising results.

As previously mentioned, there is no doubt that the institutionalization of innovation management, mainly after the Technological Innovation Law, was an important landmark for a more structured development of actions for university-companygovernment interaction.

Such evolution represents not only by the number of TTOs created since 2004, but it is above all an important reflection of the cultural shift that is taking place in Brazilian universities and research institutes by introducing intellectual property and technology transfer management in their institutional routine. This change is providing an increasinglygreater participation of Brazilian universities and research institutes in intellectual property protection, as confirmed by INPI data, which shows exponential growth in the number of patents filed by those institutions.

But that quantitative growth in intellectual property protection still would not mean much if it were not followed by actions to transfer to society the knowledge produced, which, after all, is one of the missions and reasons for the existence of universities and research institutes – produce knowledge for the public benefit. That is also the essence of the TTOs mission. From this datum an important evolution can be noticed, which is consolidated by the licenses agreed upon and the volume of royalties obtained, meaning that the objectives of taking to market the knowledge produced at the universities and research institutes is gradually being achieved.

In order to meet the desired levels of technological innovation in the country, there are many challenges to be addressed. The initial duty of the universities and research institutes is to continue intensifying research activities to ensure results that can be transferred to the production/public sector.

As to the companies, there is a need to create conditions for greater investment in innovative activities. There is the need to pursue a greater balance in intellectual property and technology transfer negotiations aiming at a win-win strategy, which will only be reached when companies perceive the solid benefits of integrating with the universities and research institutes.

From the point of view of government actions, measures are still needed to enhance the performance of universities and research institutes. Furthermore, it is necessary to continue investing in improving the national intellectual property system, particularly the INPI, for a more efficient response to intangible asset protection demands.

Another critical government role is to continue investing in economic subsidies to companies, and sharing with them the risk of experimental development of embryonic technologies with the purpose of getting them closer to the industrial scale, and therefore making them more attractive for appropriation by the corporate sector.

Lastly, it is important to acknowledge that the Innovation Law has produced much advancement in the national regulatory framework, although adjustments still need to be made to fully obtain all possible benefits. The number of projects conducted in partnership between universities and research institutes and companies is growing, but the major challenge remains to obtain practical results from the RD&I projects in terms of new products/processes placed in the market.