The historic launch of the South Asian Chapter of the Triple Helix Association was held on 19th November 2014 at the University of Management and Technology, Lahore, Pakistan. The ceremony was attended by participants from regional universities, industries, and representatives from government.
The event began with the recitation of the holy Quran, and then Mr Khalil A Arbi, Executive Vice President SATHA, gave a brief introduction on the purpose of the event, and on the Triple Helix
in general. He informed the audience that it was an important day for the University of Management and Technology, becoming a regional Chapter of the world renowned Triple Helix Association.
It was not only a matter of pride for the University, but also for Pakistan, that it is in a leading position to develop and strengthen links between universities, academia and government in the whole South Asia region. 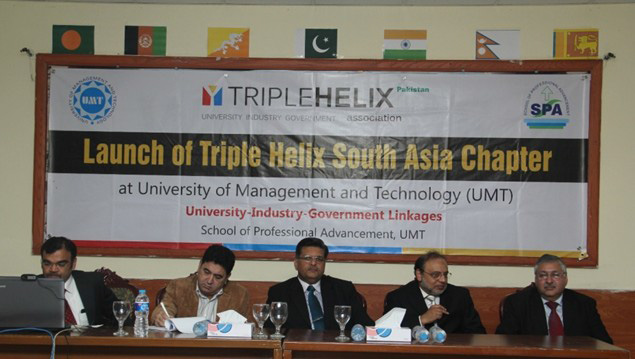 Mr Abid H K Shirwani, President SATHA, in his speech referred to the need and importance of establishing the South Asia Chapter of Triple Helix Association. Earlier in the region, academia, Industry and government were all working in isolation. None of the actors had ever thought about the needs of other. The Triple Helix concept had sparked a wave of ideas which suggested that the three actors cannot live in isolation, and that they can better serve society by joining hands together. During the session, Mr Abid told the audience he convinced the executive body of THA in Tomsk, Russia, to establish a South Asia Chapter of THA in Pakistan. He added that the establishment of a THA chapter in Pakistan was conceived during the Tomsk conference. He informed the conference that UMT is a true entrepreneurial university in Pakistan, which was established without any government funding or resources, and is now a fully functional university with over 7000 students and 400 plus faculty members. This made a convincing point to establish a THA Chapter at the University of Management and Technology (UMT). Mr Abid further added that UMT had worked on the philosophy of the THA for several years. UMT, through its subsidiary Institute of Research Promotion (IRP), is promoting applied research in the universities and linking the industries, governmental institutions, and universities, through policy research. 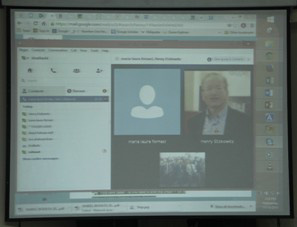 Professor Henry Etzkowitz (President THA) joined the event via Skype. He stated that the Triple Helix Association had begun in 1991, and was a platform where practitioners and
professionals sit together and discuss issues. University plays a key role in the economic development of a country and is an important function in promoting applied research. After his brief speech about the core philosophy of the Triple Helix, he answered questions from the audience. The TH philosophy is a relatively new idea for the audience in Pakistan and, hence, the audience asked many questions about the functionality and significance of the TH model for the world, and for under developed regions like south Asia. While answering a question about youth, Professor Etzkowitz said we want to put new emerging ideas in youth, where we can hope for the proliferation of the TH philosophy. The role of government in this trio is crucial in regulating all these activities, since government has the power of execution, it carries significance weight in the promotion of research-based economic development in its territory, so the role of government is critical in this trio. The Triple Helix Association provides the space to the people to bring their ideas together, and provides a road map to strengthen these three actors; Industry, Academia and Government. For the affective working of the South Asian Chapter of THA in Pakistan, the guidelines are to start research projects in industries with students of academia, and then involve government to implement these steps and to share and transfer the knowledge. We have the successful example of Brazil, where the THA Chapter is working so affectively that most of the universities have their own incubation centers.

Mrs Maria Laura Fornaci, THA Executive Director, spoke to the audience to give an introduction on the functionalities and membership mechanism of the Association. Triple Helix Association is a non-for-profit, non-governmental association, with a scientific purpose and a global reach, focused at promoting scientific debates at international level through the Triple Helix model. The THA aims at practical achievements, stimulating new knowledge generation, the codification of ideas, and facilitating networking and cooperation among the three actors both at international and local level. The THA supports the translation of academic models into practical achievements, and fosters a wide dissemination of the scientific findings and practical results.

She also informed the audience on how they could actively participate in Triple Helix activities. The THA holds a periodic Webinar Series to disseminate fresh knowledge, and enhance the peer learning process among the international community. She explained the process of membership, and said the Triple Helix Association is open to organizations, individual members, and sponsors.
The University of Management and Technology (UMT) invited guests from industry and government: Mr Nabil Hashimi, Chairman Thermosole (Pvt) Limited, and Mr Tariq Bhatti, additional secretary education, who attended the ceremony, agreed with the agenda of the THA and assured their support for the strengthening of the TH philosophy. 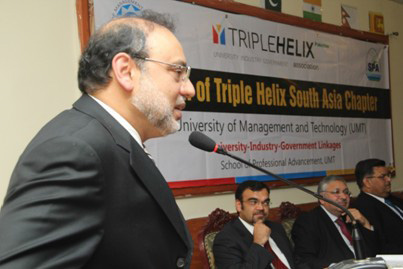 At the end of the event, Rector UMT, Dr Hasan Sohaib Murad, Chairman SATHA, addressed the audience. He expressed his gratitude to the audience for taking an interest in the Triple Helix, and congratulated the UMT family and the SATHA team for this great achievement. UMT had been on good terms with the Triple Helix team, and to house the South Asian Chapter at UMT is an achievement not only for UMT, but for the whole of Pakistan.

The event was covered by all leading national channels and newspapers. At the end of the session a ceremonial cake cutting took place, complimented by heavy applause.