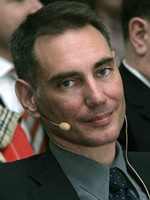 The Triple Helix can be seen as the heart of an innovation ecosystem. Government, business, and academia, see themselves as players in the same game. When they define themselves in each other’s context, they change in response to the other’s change. Therefore, a scientific opportunity is a business opportunity is a governance opportunity. Together they form an attractor, a mobile, a pump. The Helix is the metaphor that points to innovation, if one goes to a new place, so do the others.

Economies have become conscious about this, whether they call it Triple Helix or something else, because innovation is becoming the main driver of economic growth in the short term. Everything is changing now, and it is painfully obvious when business, education, or governance is out of sync.

The three Helices must be in sync and this requires shared language. Every innovation introduces new language. The innovation needs a name so that people can refer to it and a story so that people can relate to it. If people can’t relate, they won’t respond. For the Triple Helix to work, business, academia, and government must relate to each other through stories of innovation. They must all be stakeholders in the stories. They must be engaged by the stories in order to engage in them.

Here is where the Fourth Helix comes in: Innovation Journalism.

Journalism has long since been called ‘the fourth estate’, meaning it is an informal but powerful institution that democracy can’t work without. The nickname alludes to the three estates of parliament: the clergy, the nobility, and the commoners. Back then when these memes were coined, this was where society was controlled.
Until recently economic growth has been much about doing more of the same. It is about optimizing silos. People doing the same things meet and discuss best practices, peer communities are custodians of certified expert languages. In such economies, the only horizontal ministry is the ministry for finance. They are proactive in fiscal matters and reactive in the rest – they distribute the fuel between the production lines. Regulation is power.

But in the innovation economy, economic growth is increasingly seen as doing new things instead of old things. It is about challenging silos, disrupting them. It is ever more important that professions undergoing change communicate with other professions that are also undergoing change. When the powers driving economic growth are horizontal, playing a vertical game is bound to lose.

When growth is vertical, ‘vertical journalism’ makes sense. Business journalists cover business. Technology journalists cover technology. Trade journals cover trades, and so on. The journalism covering what goes on in a vertical catalyzes the creation of new words and stories in that vertical. It thereby often strengthens the walls of the silos, because people outside the vertical rarely have a stake in the storytelling. Journalism simplifies and smoothes professional jargon, it is vital for introducing new stories into the jargon and setting the agenda for the day, but it remains professional jargon, vertical language. Journalism is a commercial activity. Vertical journalism covering strong verticals have contributed to the growth that fuels their profits.
But the Triple Helix dynamics, the pump and blood flow of the innovation ecosystem, is a horizontal story. It is a multi-disciplinary, multi-stakeholder set of stories. The Triple Helix is not well served by vertical journalism. In fact, the vast amount of professional vertical storytellers competing for the attention of the actors leaves little priority in people’s minds for the horizontal story.
Triple Helix therefore requires a fourth helix, Innovation Journalism.

Here is where the structure of journalism mirrors the structure of the economy, both manifesting each other. This mutual manifestation needs to be dismantled in the innovation economy. In fact, it is in parts dismantling itself, just by the collapse of journalism as a business. That is not a good thing, though, because we still need journalism. We still need people who can do excellent research and catch people’s attention with excellent storytelling.

For InJo, innovation is the core. The elements of business, technology, politics etc, are a story’s nested components, covering innovation processes and innovation ecosystems. Compared with traditional newsbeats, InJo is multi-disciplinary; it crosses the traditional production lines.

Innovation journalism identifies and reports on issues in innovation ecosystems such as emerging concepts, interaction between the principal actors or what is happening in innovation value chains. It can combine angles and indicators on innovation that usually sort under different beats: Science and technology trends, intellectual property, finance, standardization, industrial production processes, the marketing of new products or services, business models, politics, cultural trends, social impacts and more. Innovation Journalism can be a horizontal newsbeat, but may also be a mind-set in traditional newsbeats.

This storytelling can enable societies to create wealth and well-being. A story generates value in combination with Triple Helix stakeholder interaction. The Triple Helix stakeholders have stakes in the story, and the dialectic between stakeholder interaction and storytelling, drives the Triple Helix,
Here is an illustration of the difference between covering innovation in a strictly ‘vertical’ newsroom – where beats are kept separate – using InJo as a mind-set for broadening traditional beats or applying InJo as a horizontal beat:

• Traditional: A story should stick to the aspect of the beat, ie, a technology story on innovation should focus on the technology and leave the other aspects to the other newsbeats.
• Injo applied as mind-set within other beats: A story can include any aspect of innovation, as long as it contains the aspect of the beat in question. For example, a business story on innovation must contain a business aspect, but may additionally contain any other aspect, such as technology or politics, even if this means overlapping with other newsbeats in the newsroom.
• Injo applied as horizontal beat: A story should aim to include science, technology, business and politics – as well as any other story component which is relevant for the innovation process and ecosystem being covered. It aims to integrate these aspects on an equal footing, and look at how they influence each other and co-develop.

Just like the other Helices, the fourth Helix – Innovation Journalism – needs a funding model that attracts it to do good things instead of bad things. Until today, the main funding models for journalism have been public grants and advertising. None of them are ideal. With advertising, it should not come as a surprise to anyone that many publishers prefer paparazzi photos to quality journalism, since pictures compromising the privacy of famous people cost less and generate more attention, thus more ad revenues, than quality journalism. Public service funding is also far from perfect, the feedback loop with value creation is usually unclear. In both cases there are, of course, examples of excellent quality, usually based on conscientious leadership, fortunate organizational culture, and passionate individuals. It is just that these examples will be many more and much stronger if the desire for quality is aligned with business incentives. In short, we need business models for innovation journalism and the general principles of journalism, so that better journalism is rewarded with better business.

By conducting research into the transition of journalism from ‘the fourth estate’ to ‘the fourth Helix’, the Triple Helix community of researchers and practitioners have a lot to gain. In order for the innovation economy to work well in a democratic society driven by a free market, we need to understand how journalism, communication, and innovation interact. We need to develop social and economic models for the dynamics between Triple Helix and the Fourth Helix. If we can develop funding models and business models for Innovation Journalism that facilitates wealth and wellbeing, this will enable a middle class democratic innovation economy.

David Nordfors is the CEO and co-founder of IIIJ. He was previously co-founder and Executive Director of the Center for Innovation and Communication at Stanford University, 2004-2011. He was selected one of the World Economic Forum Innovation 100, and has served on the WEF Global Agenda Councils for the future of Media and the Future of Journalism. He serves on the advisory board of the Poynter Institute, Discern Investment Analytics, and on the Global Marketing and Communications Advisory Board of Black and Veatch. He is an adjunct professor at IDC Herzliya in Israel, a visiting professor at Tallinn University, Estonia, as well as at the Tecnologico de Monterrey, Mexico, and the Deutsche Welle Akademie, in Bonn, Germany. He serves as advisor to the executive director of the Israel Academy of Sciences, and was Special Advisor to the Director General at VINNOVA, the Swedish Agency for Innovation Systems. He was the first Director of Research Funding of the Knowledge Foundation, KK-stiftelsen, one of the largest Swedish research foundations, where he built up the research funding and communication initiatives and policies. He was the first Science Editor of Datateknik, the largest Swedish magazine for IT professionals. He initiated and headed the first hearing about the Internet to be held by the Swedish Parliament. David Nordfors has a PhD in molecular quantum physics from the Uppsala University, and did his postdoctoral research in Theoretical Chemistry at the University of Heidelberg, Germany.