This article describes the strategy used by the SOFTEX 2000 Program, a joint venture between the Brazilian government and local software companies, to promote the development of new software companies in Brazil. The Program was created in February 1993, with the objectives of promoting the export of software developed in Brazil and to increase the number of skilled work positions within the country. There were (and still are today) strong competitive advantages of the Brazilian software industry to compete internationally: the abundance of well-trained engineers and computer scientists in the country (mostly due to a controversial government policy known as “market reserve”), and the indigenous creativity of the people. But in order to reach scale back, SOFTEX identified the need for new start-up and more advanced software companies. In order to meet these needs, two projects were implemented: Softstart and Genesis – Softstart, with the aim of including entrepreneurship teaching in computer science undergraduate programs at Brazilian universities; and Genesis, with the aim of creating incubators for new software companies around universities. Both programs were successful and hundreds of new software companies were created. The establishment of new incubators though gained momentum and scaled up beyond the program: in a few years hundreds of incubators sprouted all over the country, dedicated not only to software companies but also to all sorts of different technologies.

SOFTEX 2000 was a joint venture program between the Brazilian government and local software companies, created in February 1993 with the objective of promoting the export of software developed in Brazil (Araujo 2012, Costa 1997). In order to increase the number of skilled work positions in the country, the program identified the need for new companies. Two projects were envisioned to promote the creation of new companies: Softstart and Genesis. Softstart, with the aim of including entrepreneurship teaching in computer science undergraduate programs at Brazilian universities, since at the time students had no business disciplines in their curricula. The other was Genesis, with the aim of creating incubators for new software start-ups around universities.

The question was how to engage the universities in the effort? Offering a discipline on entrepreneurship to their students? Would the universities be willing to participate? How to motivate them? Which courses should be selected to receive this new discipline? Would the students be interested in enrolling? Would teachers be interested in learning how to teach this subject in order to implement the discipline?

A first experiment in teaching entrepreneurship to computer science students took place at Federal University of Rio Grande do Sul (UFRGS). One teacher, Professor Newton Rosa, was assigned to teach a discipline called “Data Processing Equipment”. Records showed Professor Rosa that in previous semesters students did not like the course contents: teachers used to invite companies to talk about their equipment and all they got were sales pitches from vendors who knew very little. Professor Rosa decided to take another course: he invited a local entrepreneur, Jayme Wagner, who had created a successful start-up called Digitel, and was a lecturer at UFRGS, to talk about the modems he produced. Students loved to hear about Jayme´s decision to create his company. In that year, 1984, Brazil passed a new law known as the national informatics policy (Marques 2002), that stimulated the creation of hardware companies in the country. Professor Rosa based the discipline, from this point on, in testimonies from local entrepreneurs that were reaping the benefits of the new law. During a meeting in Porto Alegre to promote the Softex Program for universities, he talked about his experience and suggested that Softex embraced it1 (Rosa 1998).

A few years later, Professor Eduardo Costa was the national coordinator of SOFTEX and also a teacher at the Federal University of Minas Gerais (UFMG). He decided to start a discipline on entrepreneurship at the university. Since the term entrepreneurship was largely unknown, he coined a funny name for the new discipline: “How to inoculate the entrepreneurial virus on the student’s head”. After a couple of semesters, he was invited to a directorship position at the government National Research and Development Agency – CNPq in Brasilia, far away from UFMG’s town of Belo Horizonte. He then convinced a very talented administrative staff member at the Computer Science Department (Fernando Dolabela) to take over the discipline. This fortuitous choice had a long lasting impact on the entrepreneurial movement in the country. The first edition of the discipline, still under Professor Costa´s command, had a lot of good intentions, but very shallow content. Fernando Dolabela not only took it over, but he studied the subject deeply, went to Montreal in Canada to learn directly from Professor Fillion2, and transformed the discipline into a proper academic subject with a lot of content. Sadly though, the department reacted to the discipline’s huge success with the students and, based upon the fact that Dolabela was not a professor in the Department, asked him to quit the effort!

Fernando Dolabela reacted from his exit from UFMG in great style: he developed a methodology (Dolabela 1993, 1999) for Brazil, based upon earlier works by Fillion and Timmons (Fillion 1991, Timmons 1994), dubbed Softstart, that showed prospective teachers that they could teach entrepreneurship even if they were not entrepreneurs themselves. At that time, SOFTEX managed to obtain international funding from the United Nations Development Program (UNDP), and set the entrepreneurial activity in its overall strategy. Then the Program contracted Fernando Dolabela to develop an educational kit to teach entrepreneurship.

Announced by SOFTEX in the Brazilian Computer Society congresses, several universities, besides the original group of three (UFMG, UFRJ and UFRGS), showed interest in teaching the subject. SOFTEX then offered a seminar on “teaching the teachers” in July 1996, and invited all those professors interested in learning about entrepreneurship to attend the seminar. Teachers from 66 universities did. By October 1996, only three years after the launch of the Softstart project, 45 universities were already implementing the discipline and thousands of students had already taken it – some of them went on to start their own companies (Annex 1 shows a list of universities that implemented the discipline up to October 1996). By 1998 more than 100 computer sciences departments in 23 states (out of 27) and the Federal District were offering the discipline to their students.

Besides the institutional effort, Fernando Dolabela wrote a book entitled “O Segredo de Luiza” (Luiza’ secret), that romanced the teaching of entrepreneurship through the story of a senior student of Dentistry that didn’t like the profession and wanted to start a small business to produce “goiabada” (guava jelly, a dessert made of guava fruit very popular in Brazil). The book became a national bestseller and has sold close to half a million copies in Brazil.

Two other national programs inspired by Softstart, were created: one by SEBRAE3, program REUNE – (Rede de Ensino Universitário de Empreendedorismo), with the aim of disseminating the teaching of entrepreneurship in high school and colleges in the state of Minas Gerais. Created in 1997, the REUNE program, in its second year of operation, had already thirty-two institutions enrolled. The second program was created by Instituto Euvaldo Lodi (IEL) and Serviço Nacional de Aprendizagem Industrial (SENAI). The teaching of entrepreneurship was implemented in 1988 for students on technical courses.

On August 8, 1996, the General Assembly of the Brazilian Computer Society, the organization that brings together students, teachers, and professionals of computing, during its meeting in Recife, Pernambuco, approved a reference curriculum for computer science undergraduate courses and included entrepreneurship as one of its disciplines, thus facilitating the dissemination of the discipline as proposed by SOFTEX.

The second phase of this strategy was the project Genesis. This project aimed at installing incubators around selected universities in order to host new companies created by young professionals recently graduated from Brazilian universities who had the will to start their own businesses. These incubators, called Gene,

provided professionals with all the management techniques, methods, and tools, to start the operation of their companies.
The Genes were conceived to be a consortium with at least an academic department and an enterprise support organization. This rule tried to guarantee that every Gene would have access to the technical and business skills necessary for generation of successful companies. Softex planned to install ten of these Genes. The program issued a nationwide public tender to select the localities to host the Genes of the Project. In June, 1997, twelve bids to the national tender were selected for financing (out of twenty-two). At the end of that year, ninety-seven software enterprises were generated and some had already secured international contracts.

The second tender received fourteen bids and selected eight of them, which started operating in January 1998. The ten most important Computer Science Departments in the country were participating in the operation of the Genes. The selection process included the submission of a business plan to be evaluated by specialists in the Gene. Fifty percent of these genes were located in cities in the interior of the country, contributing to the development of these regions.

In 2004, a study contracted by Softex to evaluate the results of Genesis Project, revealed that Genesis produced relevant results. The period considered was 1996-2004 (Silva 2004).

GENES DISTRIBUTION OVER THE COUNTRY 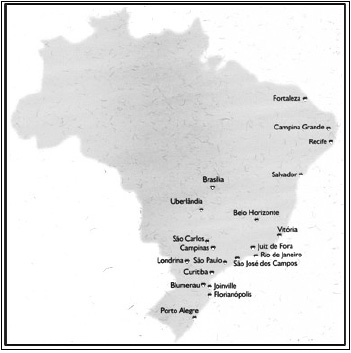 The creation of incubators in Brazil started in 1984 with an initiative from Lynaldo Cavalcanti, then president of National Research Council (CNPq). During the first decade (1984-1994), incubators were created at a rate of one per year. In the second decade (1994-2004) at a much faster rate, according to ANPROTEC4, increasing thirty percent per year.
A study published in 2011 by the Minister of Science and Technology and ANPROTEC showed the following results:

The SOFTEX Program was dedicated to the software sector, but its results in fact impacted the whole innovation sector of the country. The Genes and the companies that were attracted to the incubators came from different segments and although many companies were from the ICT sector, the movement has been widespread since many professors that started to teach entrepreneurship were originally from different departments, including some in the social sciences. The SOFTEX Program helped directly to create incubators that were dedicated to other segments like biology. The movement gathered momentum, and today there are more than 400 incubators in Brazil and their association, called ANPROTEC, is a national voice in every discussion about innovation..

Professor Fabio Marnho de Araujo is with the Computer Science Department at the Federal University of Rio de Janeiro, Brazil. He is a former President of ASSESPRO – the Association of Brazilian Software and Services Companies.

Dr Eduardo Moreira da Costa is part-time Professor of innovation at the Federal University of Santa Catarina in Brazil; and founder of the Pi-Academy, an international consulting company on all aspects of innovation, with offices in Rio and in Florianópolis. Author of Global E-commerce Strategies for Small Businesses (MIT Press, 2001), published in English, Chinese and Japanese. (2001, 2003). Dr Costa developed and organized the first MBA on e-government in Brazil and is now working towards launching a world-class MBA program on Innovation in 2015. Dr Costa consults regularly for the World Bank and the Inter-American Development Bank on Innovation. In the US, he was a visiting scholar at Harvard University from 1997-2002. In Brazil, he was the Innovation Director of FINEP (2007-2010), where he created innovative funding mechanisms for SMEs, and Director of CNPq (1993-1997), where he launched the first program for software export in the country, SOFTEX, that helped transform the software industry into a multi-billion dollar business for the country. Dr. Costa obtained his PhD degree from the University of Southampton, UK. He was enacted into the country´s Technological and Scientific Order of Merit in 2010. He sits on the Board of three companies (large, medium and small), and is a well-known lecturer in Brazil and abroad on the subjects of innovation, human smart cities, entrepreneurship, venture capital and e-government.