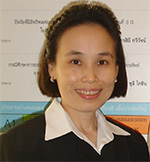 The upcoming ASEAN Economic Community (AEC) integration in 2015 will offer new challenges and opportunities of competition. This article discusses the ongoing projects of the Ministry of Science and Technology, Thailand, in its attempt to build up science, technology and innovation (STI) infrastructure for competition in the AEC market.

The upcoming ASEAN Economic Community (AEC) integration in 2015 will turn ASEAN into a single market and production base. Given that building innovative capacity is an important factor for increasing and sustaining national competitiveness, the performance of each country is influenced by a set of government policies to allocate scarce resources and make use of science, technology, innovation (STI) in the process in promoting economic growth. The AEC integration will offer new business opportunities and market development. Under a wider market opportunity of AEC integration, the AEC countries (Brunei, Cambodia, Indonesia, Laos, Malaysia, Myanmar, the Philippines, Singapore, Thailand, and Vietnam) have revisited their policies to improve competitiveness.

Table 1 shows the World development key index as a measure of economic performance. The highlighted box in Table 1 presents the AEC countries where there is a huge economic and development gap among the member countries. It can be seen that Singapore performs the best with regard to the national innovative capacity. Singapore was ranked third in the 2014 International Institute for Management Development (IMD) World competitiveness ranking and second according to the World Economic Forum (WEF) competitiveness index. Among the East Asian countries, Japan and South Korea actively build up their science, technology and innovation (STI) capacity with catch-up industrialization policies. The high R&D funding (R&D expenditure as a percentage of GDP) has shown their commitments to strengthen the national innovation systems (Lundvall, 1992, 1993, 1998, 1999, 2003).

Thailand, one of the emerging tigers of ASEAN economies and newly industrialization economies (NIEs), was placed at twenty-ninth ranking in 2014 according to the IMD World Competitiveness Scoreboard and at thirty-first ranking in the 2014 WEF Global Competitiveness Index. The Thai government has developed strategies/policies to support entrepreneurial firms in the process of economic development with the aim of building an innovative economy. The Ministry of Science and Technology, Thailand, has now focused on fostering science, technology, entrepreneurship and innovation to promote economic growth. The two major government agencies under the Ministry of Science and Technology have initiated the projects to provide STI infrastructure in support of AEC competition which will be discussed later. 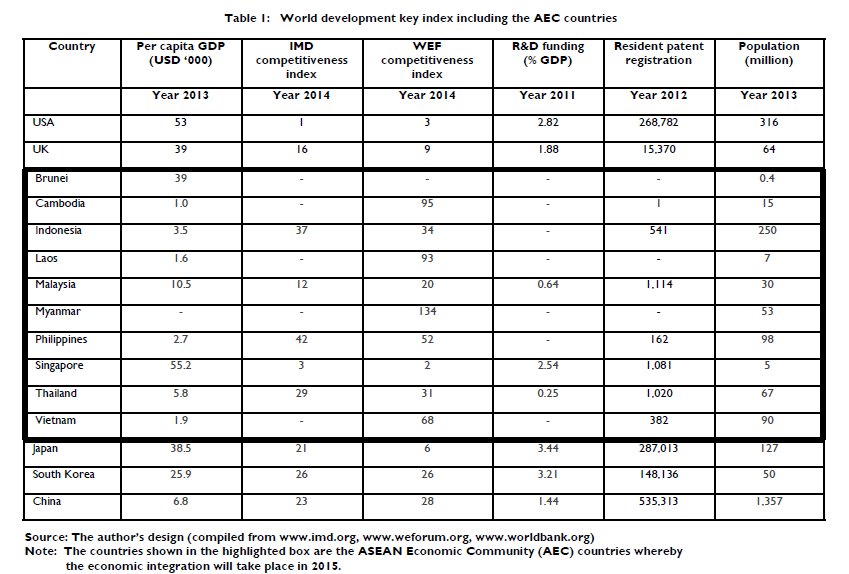 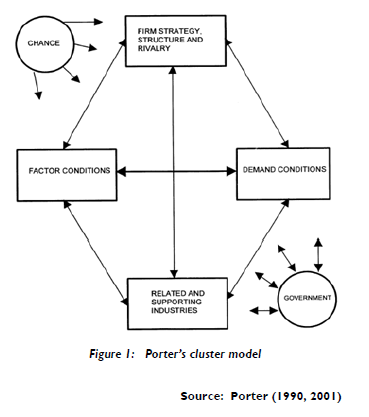 The cluster model (Diamond model) of Porter for the Competitive Advantage of Nations provides a framework for understanding collaboration/networking between the government sector and the industry sector in the form of clusters (Porter, 1990, 2001; Lai et al, 2014). Although Porter’s cluster model has the potential to influence competition, the model does not suggest how interactions need to be done. The Triple Helix model goes further in helping to suggest ‘how’ on the basis of tripartite mechanism in the industrial clusters (Figure 2). The Triple Helix model emphasizes the integration of three institutional spheres (university-industry-government relations) which would foster the conditions for innovation (Etzkowitz 2002, 2004, 2011; Etzkowitz and Leydesdorff, 1998, 2000; McEvily et al, 2004; Ivanova and Leydesdorff, 2014).
Source: Etzkowitz (2002, 2004), Etzkowitz and Leydesdorff
(1998, 2000) 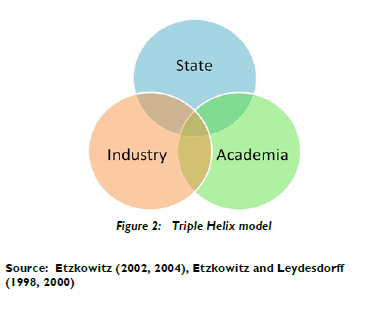 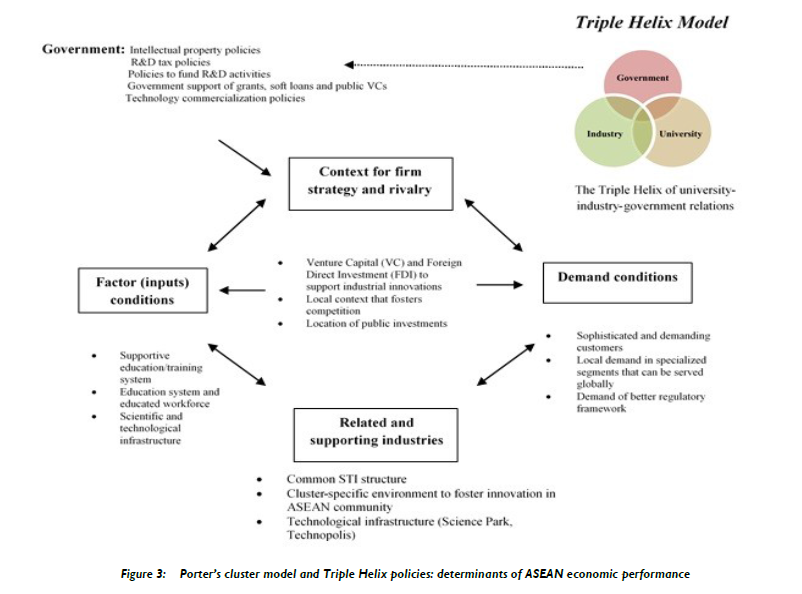 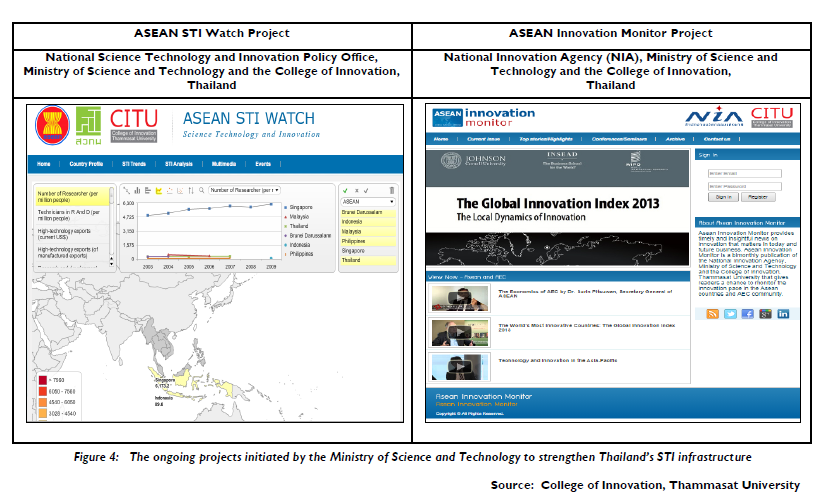 Thailand is a country in the AEC community that tries to shift its focus from cost advantage to a knowledge-based economy in order to improve its competitiveness in the AEC market. The Thai government realizes that the competitive position of the country cannot depend on the inexpensive labor under the increasingly fierce competition in the AEC market. Thailand needs to compete with the application of science, technology and innovation (STI) in driving economic growth. In responding to the challenges and opportunities of the AEC integration in 2015, the two major government agencies (National Science Technology and Innovation Policy Office and National Innovation Agency) under the Ministry of Science and Technology have initiated the projects to strengthen STI infrastructure. The National Science Technology and Innovation Policy Office and the National Innovation Agency (NIA) in collaboration with the College of Innovation, Thammasat University of Thailand, have developed the projects shown in Figure 4 to support the national governance and enhance the national innovation system. Both projects will provide the infrastructure necessary to assist policy making process and promote innovation activities.

The National Science Technology and Innovation Policy Office, Ministry of Science and Technology, is a national agency established to formulate policies and plans on STI to help the country move towards a knowledge-based economy. ASEAN STI Watch is an ongoing project under the framework of ASEAN Innovation for Global Market providing STI-centric one-stop web portal service of ASEAN innovation. The portal collects STI data and statistics from ASEAN member countries, and is designed to enable access to up-to-date analysis of STI which would support the conduct of STI policy research and assist Thailand in moving up the technological ladder. ASEAN STI Watch is built on databases covering all major indexes of scientific and technological activities (Frascati Manual), the innovation index (Oslo Manual), the human resource index (Canberra Manual), the International Institute for Management Development (IMD), the World Economic Forum (WEF), competitiveness factors and others. ASEAN STI Watch provides a comprehensive online information resource to assist the government in sharpening its policy tools. The businesses can also use the ASEAN STI Watch as a tool to investigate the innovation activities of AEC member countries, and to gain an understanding of the AEC industry trends in order to prepare them for competition.

Under the Triple Helix perspective, the ongoing projects of ASEAN STI Watch (by the National Science Technology and Innovation Policy Office) and ASEAN Innovation Monitor (by the National Innovation Agency or NIA), reflect the attempts of the Thai government in strengthening the national innovative capacity. The involvement of the College of Innovation, Thammasat University, in the innovation activities initiated by the Ministry of Science and Technology has shown the important role of academic institutions to co-innovate the national innovation system. As Thailand currently attempts to shift its position towards a knowledge-based economy, both projects of ASEAN STI Watch and ASEAN Innovation Monitor will provide STI infrastructure to support the policy making process and guide effective decisions in firms regarding their innovation activities and investment in the AEC market.

Although Porter’s cluster model (competitive Diamond model) provides a framework encapsulating drivers of economic growth, the model does not suggest how interactions should be done. The Triple Helix does go further in suggesting ‘how’ on the basis of tripartite interactions in the industrial clusters. In other words, the Triple Helix model helps suggest ‘how’ on the basis of strengthening university-industry-government relations linked to the cluster model.

Taking into account the upcoming ASEAN Economic Community (AEC) integration in 2015, the AEC would be an integral pillar (similar to the European Union (EU) single market) giving new challenges and opportunities of competition. The AEC integration would offer a single market and production base whereby the member countries would face intense market competition. Thailand has tried to compete with the application of science, technology and innovation (STI) in the knowledge-based economy. It is expected that the projects of ASEAN STI Watch (by the National Science Technology and Innovation Policy Office) and ASEAN Innovation Monitor (by the National Innovation Agency), would help strengthen the capabilities of Thailand in the AEC market. The ongoing project initiatives by the Ministry of Science and Technology and the College of Innovation, Thammasat University, reflect the coordination mechanisms under the Triple Helix policy perspectives to promote a knowledge-based economy of Thailand.

Jarunee Wonglimpiyarat, PhD, ACCA, CPA, CIA, CFE, CGAP, CFSA, CISA, CISM is a member of the College of Innovation, Thammasat University, Thailand. She holds a PhD in Technology Management from Manchester Business School, University of Manchester, UK, and has postdoctoral fellowships at Boston University and Harvard University, USA. She has worked at PricewaterhouseCoopers, Standard Chartered Bank, Citibank N A, Sussex Innovation Centre, Boston University Technology Commercialization Institute, and the US Securities and Exchange Commission. She has won many awards for her research contributions including the Elsevier Scopus Young Scientist Award, an award designed by Elsevier, the World’s leading research publisher of scientific information. She has been awarded for having the highest publications in international journals with the highest impact factors. Dr Wonglimpiyarat