The workshop held on 27 May 2015 in Terni (Umbria Region, Italy), ‘L’Università imprenditoriale come motore dello sviluppo territoriale’, promoted by CARIT FOUNDATION, with the patronage of Terni Municipality, was attended by almost 100 delegates from the University of Perugia, the Municipality, the Chamber of Commerce, the industrial association of Terni, and other regional stakeholders.

The city of Terni is facing a challenging transition from heavy industry, which has been for decades the main pillar of the province economy but is gradually declining, to a more dynamic knowledge- based economy able to exploit the existing territorial assets.

Professor Etzkowitz was invited to talk on the crucial role of the university for regional recovery, as in his Entrepreneurial University model. 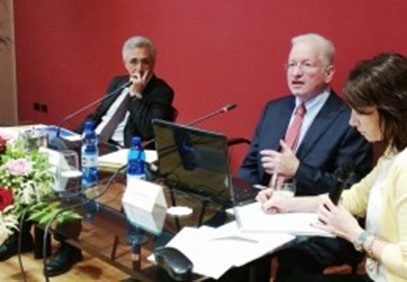 The model of the ‘entrepreneurial university’ is the core of the theory of the Triple Helix and conceptualizes a proactive approach in providing data, research, and knowledge by Universities to be used to create new innovation output and impact at regional level. Universities are not just committed to producing a new generation of professionals, but also to become incubators and engines to create entrepreneurs, business ideas, and innovation, contributing to the economic growth of companies and of the regional innovation ecosystem as a whole. As companies which increase their level of technology, universities engaged in their third mission offer higher levels of training and knowledge-sharing/spill over, while the government acts as a public contractor, as well as a source of regulation and control. The development of these characteristics in the three actors of the helices helps to set up a circular process, where to take advantage of the resources together, innovating, and creating overlays for further collaboration.

Professor Etzkowitz talk was followed by a series of speeches from local Triple Helix actors, who agreed on the importance of a stronger cooperation between industry-academia-government for designing joint initiatives, able to facilitate the knowledge spillover in and between academia and industry for boosting innovation in existing companies and fostering new business creation in new strategic fields, which might lead to local economic regeneration.

On 27 May 2015, a restricted workshop ‘Digital Transformation: the opportunity for a EU wide entrepreneurial Renaissance’ was held at Fondazione Giacomo Brodolini premises in Rome with Alessandro Cenderello, Managing Partner for the EU Institutions, Ernest and Young in Brussels, and Henry Etzkowitz as keynote speakers, and chaired by Fabio Sgaragli. The events scope was to present and brainstorm with the attendees the impact of new technology and disruptive innovation on innovation intermediaries’ service provision.

The workshop began with a presentation on the main outcomes from the Ernest and Young report ‘Digital Transformation of European Industry and Enterprises’, which showcases new business opportunities that have resulted from unprecedented business models that are being powered by advanced digital technologies.

The biggest digital opportunity for Europe is in the transformation of existing industry and enterprises. New business models challenge traditional ways of doing business, and it is estimated that three quarters of the value of the digital economy will come from traditional businesses. Europe needs to fully exploit these opportunities to become more competitive and in a position to invest and do business.

Innovation is a complex process but it is a crucial part of enabling job creation, growth and ultimately getting Europe back on track. One key to turning round the situation in Europe is to find efficient and strong ways of supporting innovation in the market. The discussion focused on how innovation intermediaries could better serve this purpose, and what different/more effective and efficient support they might provide to EU companies to catch up with other international innovation leaders, thus exploiting the opportunities offered by the digital transformation.

The workshop ‘Università Imprenditoriali: modelli ed esempi di come l’Università può adempiere la sua terza missione’ was organized in Rome on 28 May 2015 at the Link Campus University (LCU). The event was chaired by Professor Claudio Roveda, President of LCU, and Professor Etzkowitz keynote speech was followed by a talk by Tatiana Pospelova, a member of the Executive Committee of the Triple Helix Association and leader of the THA Russian Chapter, on University Technology Transfer in Russia. The event was attended mainly by delegates of Italian Universities and research centers, who discussed the conditions for a more efficient spillover and exploitation of knowledge coming from the University in the light of different regulatory frameworks and cultural contexts. 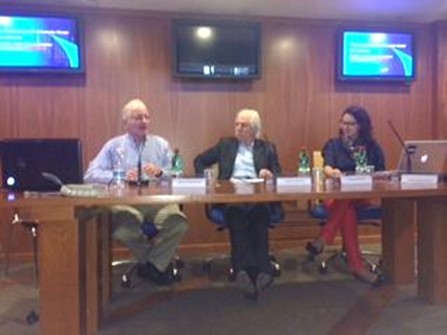 The seminar in Milan was held on 29 May 2015 entitled “Research, Innovation and Technology: gendering the Triple Helix” at the Fac- ulty of Social, Economic and Political Sciences (Sala Lauree – Via Conservatorio 7) at the University of Milan. The event was organ- ized in the framework of the 7FP European Project STAGES – Structural Transformation to Achieve Gender Equality in Science (www.stages.unimi.it) in collaboration with the Triple Helix Asso- ciation (www.triplehelixassociation.org) and NASP – Network for the Advancement of Social and Political Studies (www.nasp.eu/). The seminar was opened by Professor Maria Luisa Leonini, Depart- ment of Social and Political Sciences and Director of the Centre GENDERS – Gender and Equality in Research and Science, who welcomed Professor Henry Etzkowitz. Professor Etzkowitz pres- entation focused on the analysis of barriers, possible solutions, and successful cases to increase female participation in Science and Technology. 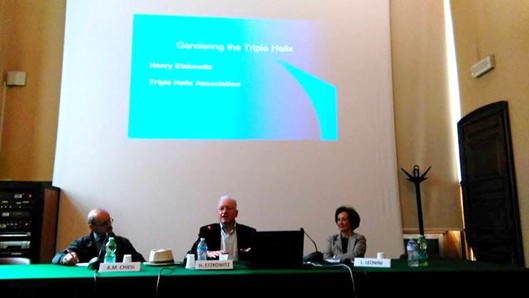 The presentation was followed by remarks and questions from Professor Antonio Chiedi, Director of the Department of Social and Political Sciences.

The seminar ended with a lively debate during which many of the PhD students attending the seminar asked questions.