A Report from the United Nation headquarters in New York City

The UNITED NATIONS General Assembly High-level Meeting on the overall review of the implementation of the outcomes of the World Summit on the Information Society took place on 15-16 December 2015 at the UN Headquarters in New York.

This high-level meeting provided an opportunity for in-depth discussions on important issues in the implementation of the WSIS outcomes, including the progress, gaps and challenges, as well as areas for future actions.

FRAmericas had been invited to participate to the meeting and this paper reports its main highlights:

1. The plenary, on 15-16 December in accordance General Assembly rules of procedure, featured consecutive statements from Member States and non-government entities.

2. The annual GemTech Awards, organized by UN Women and ITU on the evening of 14 December, recognized outstanding efforts to ensure that girls and women achieve digital equality in all its dimensions.

3. Sixteen side events, organized by Member States, UN agencies, and non-government stakeholders between 14 and 16 December, offered interactive exchange on key topics cited in the review and future action.

The UAE and Latvian missions to the UN were co-facilitators of the meeting. Two events drew particular attention:

– On the morning of 15 December from 9:00 to 9:45 am in the Trusteeship Council, the UAE and Latvian missions organized a special welcoming event for all delegates. Encapsulating the content and spirit of the review, the event heard leading voices in the ICT sector discuss the last ten years’ progress and challenges, and suggested future action for the WSIS community.

– On the evening of 15 December, from 18:00 to 20:00, all delegates were invited to a reception in the UN Delegates Dining Room hosted by the co-facilitators.

1. CONTRIBUTIONS TO THE WSIS+10 AGREEMENT

In the context of the Informal Interactive Stakeholder Consultation on the “Zero Draft”, held on 19 October 2015 at the Headquarters of the United Nations in New York City, FRAmericas made a few suggestions on how to strengthen the text of the WSIS+10 REVIEW: NON-PAPER1. FRAmerica’s intervention in the meeting focused on three items:

a. That sufficient evidence exists today to demonstrate that ICT indeed has accelerated progress in terms of socio-economic development and provided new solutions to development challenges. Therefore, the use of the tentative wording “ICT has the potential to …” seems outdated. After fifteen to twenty years of experience of efforts in this field, ICT potential should be more than proved.

b. Such evidence might not be adequately systematized or be dispersed, thus making it difficult to perform a clear assessment of ICT impact on development challenges.

c. Thus, WSIS+10 should include among priority actions listed in
par.18 the need to “support efforts to; (i) quantify and analyze the impact of ICT on development challenges; and (ii) analyze the comparative efficiency and effectiveness of alternative project implementers in the use of funding devoted to support ICT for Development, in particular NGO and other Civil Society organizations. 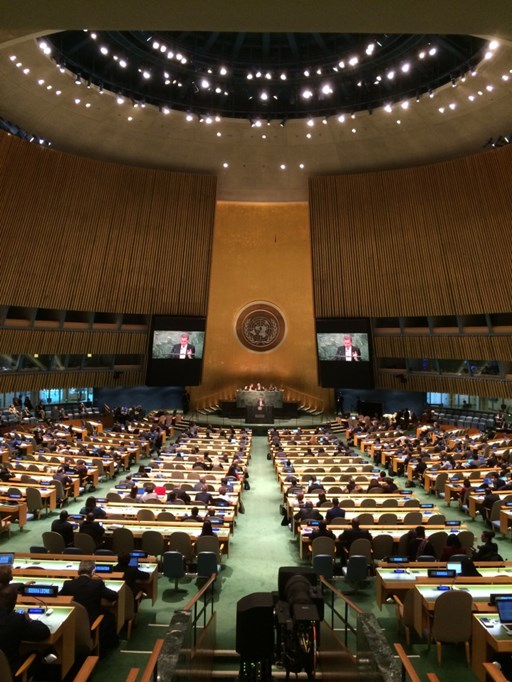 Most of FRAmericas’ suggestions were accepted and have been incorporated in the WSIS+10 Agreed Document2 as follows:

a. Acknowledge the well documented role of ICT in support of development and not only its “potential”. The text of the Non-Paper in the ICT for Development section described ICT as a potential contributor: “We recognize that ICT have the potential “ … to accelerate progress of sustainable development (par.16 non-paper), to provide new solutions to development challenges (par.17 non-paper). The final agreed document includes much more assertive and forward looking language: “We commit to harnessing the potential of ICT to achieve the 2030 Agenda for Sustainable Development and other internationally agreed development goals, noting that ICT can accelerate progress across all seventeen SDGs” (par.17 in agreed document). The agreed document goes further, including a call on all sectors to “integrate ICTs in their implementation approaches to the SDGs, and dedicates a full paragraph to acknowledge contributions by ICT to drive poverty eradication and improvements in economic, social and environmental conditions (par.18 of agreed document), as well as to social inclusion [specifically mentioned by FRAmericas] (par.21 agreed document).

FRAmericas is very proud to have contributed, albeit modestly, to the efforts of the WSIS+10 process, and looks forward to checking on the progress in the implementation of those recommendations.

2. DEVELOPING NETWORK TO SUPPORT SDG17 PROJECT WITHIN THE ON-GOING DISCUSSION ON THE NEW SET OF THE UN SUSTAINABLE DEVELOPMENT GOALS (SDGS)

The most striking aspect of the attainment of the SDGs is the role of ICT as a common enabler. This element prompted FRAmericas to propose to the UN a project focusing on SDG n.17 (SDG17) that would facilitate its attainment by the due date.

In doing so, FRAmericas has secured the support of the Triple Helix Association (THA) and its members, by helping disseminate FRAmerica’s SDG17 project and encourage its membership’s participation within the on-going discussion on the new set of UN Sustainable Development Goals (SDG). THA’s Magazine “Hélice” published on September 3, 2015 included a full description of the SDG17 project in its “News from the Americas” section.

During the Informal Interactive Stakeholder Consultation on the “Zero Draft” of the WSIS+10 agreement, held on 19 October 2015, FRAmericas suggested the WSIS+10 agreed document should prioritize the analysis of efficiency and effectiveness of current ICT financing and project efforts. FRAmericas suggested including support to analyze alternative financing mechanisms and means in order to identify the most effective means to achieve the results that are sought with the limited resources that are available. However, the agreed document did not adopt this recommendation. Nevertheless, FRAmericas is going aheads with a small-scale attempt at pursuing such an objective. The 2016 Program of FRAmericas attempts to develop observations on financing effectiveness and efficiency through the analysis of outputs, outcomes, and impacts from Civil Society efforts as compared to the same from the project undertaken through multi- lateral development organizations and governmental agencies. The Program will, of course, generate only case-studies and data, but it is FRAmericas’ hope that its results may induce the UN system to support further work along those lines.

1
The Non-Paper condensed written submissions by Member States and stakeholders.

2
“Outcome Document on the High-Level Meeting of the General Assembly on the Overall Review of the Implementation of WSIS Outcomes”, which was officially presented in General Assembly on 15-16 December 2015. www.framericas.org/wp-content/uploads/2016/01/WSIS+10-agreed-document-2015-Dec-UNPAN95707.pdf