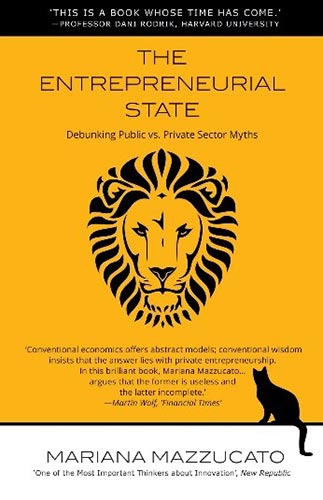 Mariana Mazzucato is Head of the Innovation Economy’s discipline, and holds the RM Phillips Professorship, in the Department of Political Science at the University of Sussex (UK). She is a consultant on development stimulated by innovation for the British Government, and was recognised by the American magazine ‘New Republic’ as one of the most important thinkers on innovation today. She is the author of the book ‘The Entrepreneurial State: Debunking Public vs. Private Sector Myths’.

The book presents the State’s role in the economy and innovation. It debunks the myth of a sluggish State at odds with a dynamic private sector. The author uses several case studies that show the opposite situation. These illustrate that the private sector is only prepared to invest after the entrepreneurial State has already made the high-risk investment. Among the examples of case studies, we present the State’s role in the biotech and pharmaceutical industry, in the ‘green revolution’, as well as several detailed examples of Silicon Valley. The author contends that, in the history of modern capitalism, the State not only corrected the ‘market failures’, but also shaped and created markets, paving the way for new technologies in sectors that private organizations only ventured after the initial risks had been taken by the State. Thus by not recognizing the State’s role we are only socializing the risk while privatizing the rewards.

The author acknowledges the work of economic historians Carlota Perez and Bill Lazonick who facilitated her thinking about the role of change in the financial and productive ‘capitals’. They also helped her to understand the State’s role in guidance for productive purposes which were not merely speculative. She thanks Oner Tulum and Matt Hopkins for information on the aid granted by the State to Apple, and the understanding of the concepts of clean technology, respectively. She also thanks Caetano Penna and Caroline Barrow for editorial assistance and the funding that enabled the author to take some time off to devote herself to the book (a Reforming Global Finance’s grant, the Ford Foundation, directed by Leonardo Burlamaqui), among other names that have been mentioned.

The preface to the book is written by Carlota Perez, author of ‘Technological Revolutions and Financial Capital: The Dynamics of Bubble and Golden Ages’, currently Professor at Tallinn University of Technology in Estonia; London School of Economics, University of Cambridge, and University of Sussex, UK. She discusses the main issues of the book, comparing the preface author’s vision to the vision of the author of the book, besides containing various compliments to the author.

In the Introduction: do something different, the author writes about the importance of the subject matter of the book, i.e. she shows that there is an incomplete view of the State’s role in the economy. This vision leads to the weakening of the State’s performance, especially in times of crisis. The Chapter details the purpose of the book and demonstrates the real role that the State has assumed in the countries in which innovation happens. The book is a revision of a previous work. The author comments that the choice of the book’s title was based on the need to prove that the private sector was not the only sector to take risks in innovation projects. The book’s cover provides the reflection of the real image of the State (a meek ‘cat’ or a decisive ‘lion’). Finally, she defends the book´s theme (the Entrepreneur State) which is widely discussed in Chapter 1.

Chapter 1, From Crisis Ideology to the Division of Innovative Labour, introduces the key focus of the book. More specifically, it compares the most common view held by the media, businessmen, academics, and politicians with that of the author on the State’s position on the market, technology, innovation and economic growth. The first view represents the State’s image as a bureaucratic machine which is ‘heavy’, static and, as the author qualifies ‘nosy’. The second view, defended by the author throughout the book, presents the State as responsible for investment in the areas of higher risk and uncertainty. The author places the State as an entrepreneurial agent and introduces the concept of risk entrepreneurship of the State. In the last case, she posits that the State’s role is not to eliminate the risks, but to take them to create new markets.

From Chapter 2, Technology, innovation and growth, to Chapter 9, Socializing risk and privatization of rewards: can the entrepreneurial State eat its cake too?, the author deepens the main justifications that supports the vision presented in Chapter 1.

The author presents in Chapter 2 the role of innovation and technology in economic growth for an economist’s perspective. The Chapter presents two theories that attempt to explain the State’s role in the growth driven by innovation. Firstly, the theory of ‘market failure’ in which the State is simply redressing the areas that are underserved by the private sector. Secondly, the theory of ‘innovation systems’, where spending on R&D is seen as part of a system that produces and disseminates knowledge throughout an economy. The author highlights the system’s flaw, that the latter is not very different from the first theory. Since the State would act as a facilitator of innovation, instead of only creating the conditions for it, the author shows that these two theories helped increasing public investment in innovation, and also leading the support of certain myths as reflected by the lack of perception of the lead investor role taken by the State. Myths are related to issues, such as the relationship between innovation and growth; the role of small and medium enterprises in innovation; the significance of patents for the knowledge economy; the importance given to the risk of capital; and the sensitivity of investments in innovation subject to various types of tax subsidies.

Chapter 3, Risk-Taking State: From ‘De-risking’ to ‘Bring It On!’ adds to what was discussed in the previous chapter to show a different view: the State as the main investor and markets former. The author shows that this vision does not replace the other two theories, but complements them, and if the vision of the State as an entrepreneur was observed, it would prevent public policies based on the two theories. The Chapter also presents the risk and uncertain definitions when the State as the main investor in basic research. Among the examples shown, we have the pharmaceutical (where the author states that most innovative drugs were mainly produced with public funds), and biotechnology (where the author shows that the private sector only invested heavily when the industry was already mature).
Chapter 4, The US Entrepreneurial State, shows examples in the recent history of the industrial policy of the United States as an Entrepreneurial State, where it has been very active in new technologies creation and commercialization.

The author gives four examples of the roles that the Entrepreneurial State can take: 1) the creation of the Agency for Defense Advanced Research Projects (DARPA); 2) the creation of the Small Business Innovation Research (SBIR); 3) the approval of Orphan Drug Act of 1983; and 4) the creation of the National Nanotechnology Initiative. She concludes that the existence of an innovation system alone is not sufficient to achieve the desired results in research at the frontier of knowledge. Only when the State takes an active role that better results can be achieved. She also highlights the types of risk that the public sector is willing to take.

Chapter 5, The State behind the iPhone, focuses on the history of Apple, often used to exemplify the market power and the minds that revolutionized capitalism. The author shows that this company has not only received public investment from the beginning, but also brilliantly used technologies developed with public funding to create its products. Among these technologies, the author presents the internet, GPS, touch screen, and voice-activated personal assistant (SIRI).

In Chapter 6, Pushing vs. nudging the green industrial revolution, the author presents what she believes to be the next revolution after the Information Technology revolution – the Green (energy) revolution currently controlled by the State. She includes the example of China that plans to produce 1000GWs in wind power by 2050, and shows how some countries (mainly China, United States and United Kingdom) are directing their investments towards global clean tech industries, focusing on economic growth and minimizing climate change, in addition to the role played by other nations.

In Chapter 7, Wind and solar power: government success stories and technology in crisis, the author details the ‘entrepreneurial’ State working in the green revolution by launching specific clean technologies; in this case, wind turbines and solar panels. She relates historical examples of innovation policies that have been ineffective, and how the State has played an important role in promoting radically innovative technologies. It highlights the responsibility of Germany, Denmark, and China as key leaders of the green revolution that has been spread by other economies. She confirms that this revolution depends on overcoming three major myths: 1. innovation is synonymous with R & D; 2. Start-ups will lead this revolution; and 3. Venture capital loves risk, and the formation of an innovation system in which all gain (either the public or private sector).

Chapter 8, Risks and rewards: from rotten apples to symbiotic ecosystems, and Chapter 9 share the concern of the author with the fact that in most situations where the State appears as the main investor, it has historically not received the results compatible with the assumed risk. The author quotes the pharmaceutical industry as an example, where remedies financed with public money end up getting too expensive; and the IT industry, in spite of State investment, some companies stopped paying taxes to the government that stimulated them. Chapter 8 gives the example of Apple, while Chapter 9 examines this concern more fully. In times of crisis, it becomes even more important for the State to discuss how it can ensure return on this ‘investment risk’ without tax increases. By the end of this chapter, the author presents some ways of ensuring that return to the State: Golden shares on intellectual property linked to a national innovation fund;  repayable loans (she explains an example of the student loans that are only paid when the student reaches a certain salary level); earnings retention through participation in companies using State technologies; and, finally, development banks (banks where German, Chinese, and Brazilian are placed as examples of relative success to be replicated).

Finally, in Chapter 10, Conclusion, the author ends with the reflection that the idea of a proactive State and entrepreneurial risk investment possibility is often an overlooked, and only materializes when the prevailing prejudices are overturned, changing the way citizens view the State’s relationship with their organizations and with other actors, in the innovation system, and the State being able to attract the right kind of talent and knowledge.