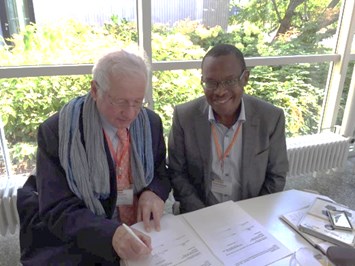 We are pleased to announce that during the XIV International Triple Helix Conference in Heidelberg, Germany, Professor Henry Etzkowitz, the THA President, (left) and Mike Mutungi, CEO of I Choose Life – Africa, (right) signed an agreement to host the forthcoming Triple Helix International Summit in Kenya, in Nairobi, Kenya on 4-6 April 2017.
The Summit theme is the Role of the Quadra Helix in accelerating the achievement of vision 2030 and SDG’s in Health, Education, Governance, Technology, Digital Literacy Green Energy and Curriculum Reforms”.
Should you wish to submit a paper to the Summit, details are given on this page.

The Triple Helix Association announces that there will be an election for Executive Board Members at the end of 2017.
We are looking for active professionals, either academic, practitioner or civil servant, with good external connections and with the power to influence others’ decisions and/or with an interest for TH dynamics and debate, willing to take over THA specific operational tasks.
To submit your application to participate in the Election, please send a one-page word document containing 800-1000 words to include:

Brasil Junior, RedeCsF (Sciences without Borders Alumni Network), Brasa, AIESEC, and Enactus, came together in order to produce a bottom-up, grassroots piece of research to reflect the student perspective on entrepreneurial universities, and bring the agenda to national attention.
Unlike most other existent rankings which are usually composed and selected either by commercial ranking agencies or an academic board, this ranking sought to reflect the student perspective and demands. The study has been recently accomplished by Justin Hugo Axel-Berg, Daniel Neves Pimentel, and Guilherme Rosso under the GEUM initiative.

Background
The ranking group was inspired by the emergent tendency in global higher education towards entrepreneurial universities that produce knowledge in the context of application, and seek to contribute to the
construction of knowledge societies and economies. The issue has received much specialist and international attention in Brazil, and competences are growing rapidly. The topic has yet to receive mass exposure and attention and, therefore, has limited political clout as a concept.

Methodology
The research took the form of two phases, one as a qualitative opinion survey of respondents to discover student perception of what an entrepreneurial university is, from which 4255 responses were elicited. These results were then used to inform metric choice in the second phase; the construction of the ranking itself. This phase utilized student ambassadors in each university to gather information, combining them with publicly available data from the ministry of education and the commercial domestic ranking Folha de Sao Paulo ranking. This second phase had upwards of 6000 respondents.

Metric Composition
Students were encouraged to respond to the first section via a multiple choice questionnaire as to their opinions on the most important characteristics of an entrepreneurial university, and a semi-structured section in which they were encouraged to write upto 500 characters on what an entrepreneurial university is. Textual analysis techniques were applied to the 4255 responses from this stage, and a guiding tripartite definition was used to inform the composition of stage two.
“An entrepreneurial university is an academic community, inserted into a favourable ecosystem, capable of developing a society through innovative practices”,
From this, the metrics were divided as illustrated below.

Results
The results were published on 8 November 2016 at www.brasiljunior.org.br.

Conclusion
The problems of constructing a ranking, especially for something with multivalent results like an entrepreneurial university are well documented. The potential power of rankings, however, lies in their ability to gain wider attention and to serve as drivers to mobilise public opinion and pressure for change. This ranking has attracted much press and attention outside of academia, and generated internal dialogue.
For any ranking to be useful, it must seek to represent as broad a range of information about the included universities as possible. Because many universities in Brazil have relatively limited capabilities, metrics are geared relatively low by global standards. As such, this ranking shows which universities in Brazil are best positioned to become entrepreneurial universities, and which have the most entrepreneurial stance.
Future iterations will seek to include more output and impact-based measures, as universities begin to respond to the increased articulation of student demand.

A new Fellowship opportunity at Stanford Graduate School of Business, one of the top ranked business schools, will cover tuition and fees for MBA students, but the program comes with a catch: students must be willing to take a job in the Midwest.
Students often select California-based Stanford because they know they’ll get a great education and make contacts in Silicon Valley, where many of them presumably want to work after graduation, but the School has plans to funnel students to more ‘underserved regions’ where the economy could benefit from an infusion of talent.
In its inaugural year, the Stanford USA MBA Fellowship will pay three students $160,000 over two years to attend the university. Within two years of graduating, recipients are required to find work in the Midwest, where they will ‘contribute to the region’s economic development’ for at least two years.
New Fellowship at Stanford Graduate School of Business
To qualify, applicants must demonstrate financial need and have strong ties to the Midwest, which may include current or prior residency, or graduation from a high school in the region.
An online summary of costs associated with attending the School of Business puts tuition and fees over $111,000 per academic year for individuals living off-campus, so the Fellowship’s financial award might not suit low-income students.
The Midwest – which the fellowship defines as Illinois, Indiana, Iowa, Kansas, Michigan, Minnesota, Missouri, Nebraska, North Dakota, Ohio, South Dakota, and Wisconsin – might not seem like the hotbed of innovation that Silicon Valley is, but living in the ‘Silicon Prairie’ has of benefits, including competitive salaries and often a low cost of living, and the tech boom echoes across the country. Michigan and Illinois were among the five states that added the greatest percentage of tech jobs in the first six months of the year, according to an analysis of US Bureau of Labor Statistics by the research firm Dice.

According to Professor Mammo Muchie, Co-Chief Editor of AJSTID, and the DST-NRF South African Research Chair in Innovation Studies, the journal will provide an important outlet for research on process as well as the impact of science, technology, and innovation at two levels. It will specifically cover and address the objective of achieving industrial growth, together with the successful achievement of broader socio-economic development, particularly in Africa and other developing economies.
The other Co-Chief Editor of the Journal, Dr Angathevar Baskaran, is from the Department of Development Studies, Faculty of Economics and Administration at the University of Malaya, Kuala Lumpur in Malaysia. Associate Editors include highly acclaimed academics from various institutions across the world.
AJSTID is listed with the Emerging Sources Citation Index (ESCI), SCOPUS, the International Bibliography of the Social Sciences (IBSS), the Department of Higher Education and Training, and in other citations such as EBSCO.