The main interactions between Triple Helix strands (industry, academia and government) have been extensively studied, understood and utilized (Etzkowitz and Leydesdorff, 2014). In this paper we focus on cross-industry interactions (within the industry strand) and suggest ways in which tailored government policy could foster and benefit from these interactions.

Cross-industry products/services are often created by addressing needs in one industry utilizing approaches developed in another industry. A notable example is GE revolutionizing children’s experience of undergoing MR scans from terrifying to terrific by utilizing best practices from amusement parks industry; resulting in 4x reduction of sedation rate from 80% to 20%, as well as improved scan image quality (GE Healthcare, 2012). There are multiple success stories across a variety of industries (Enkel and Gassmann, 2010).

Effectiveness of the cross-industry approach have been long recognized in academic works; e.g. one of the principles of the theory of the resolution of invention-related tasks (TRIZ) is that most problems have already been solved, just in another application field (Altshuller, 1999).

Leading corporate strategy consultancies have identified cross-industry as one of the top issues that executives should and do pay attention to (McKinsey, 2017). Interestingly, cross-industry activities are seen as both a threat – where the majority of executives view competitors from other industries as the biggest threat (IBM, 2017), as well as an opportunity – where future growth prospects tend to stretch across multiple sectors (Accenture, 2013).

The importance that cross-industry plays in corporate strategy is reflected by increasing the volume of cross-sector M&A activity (deals where the target sector differs from the acquirer sector) which has surpassed one trillion US$ per year on (Figure 1).

We propose that the underlying cause of increases in cross-industry activities is due to increases in value shifts – changes in what constitutes value, how it is produced and captured; driven by shifts in consumer preferences, technology, business models, etc.

The importance that cross-industry plays in corporate strategy is reflected by increasing the volume of cross-sector M&A activity (deals where the target sector differs from the acquirer sector) which has surpassed one trillion US$ per year on (Figure 1). 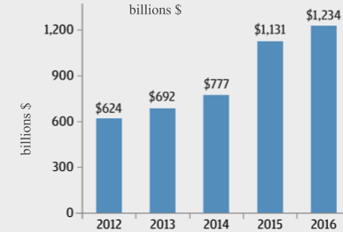 The traditional values that corporate strategies have focused on were improvements in price and quality. However, recently there is an increase in values that corporations and consumers focus on; e.g. in (Almquist et al, 2016) thirty elements of value have been proposed; such as connectivity, sensory appeal, wellness, etc.

Different industries are focusing on delivering different values; e.g. the hospitality industry excels at providing “comfort” and “relaxation” values; the fashion industry has long been known for providing not only the value of “aesthetic appeal” but also of “confidence”. As values are shifting; companies from other industries are better equipped to take advantage of those shifts; and new “combined” products/services are created either via partnerships, acquisitions or other means.

In this section we propose that government policies should be aimed at catalyzing cross industry activity; which in turn is likely to result in the improvement of cross-industry value creation, as well as keeping corporations and regions competitive by assisting with adaption to value realignment.

Cross-industry opportunities often arise across a broad range of industries; in particular industries that previously had little contact; hence there are not many established ways of spanning these industries. Government by its nature is dealing with all of the industries; and hence is in unique position to play the bridging and catalyst role