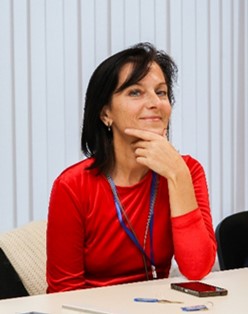 This article analyzes the existing approaches to the interpretation of the phenomenon of intrapreneurship.  The author identified internal entrepreneurship as a modification of the organization’s management system, creating the conditions for identifying and growing innovators within the organization, increasing the speed and adequacy of its response to changes in the external environment.  Elements of such a management system are a decentralized organizational structure with built-in innovation support units, a horizontal management model, and an entrepreneurial culture supported by an empowering leadership style.
Key words: Intrapreneurship; horizontal management model; innovation; entrepreneurial culture; transformation of culture.
The urgency of the problem
Modern companies are facing a tougher competitive environment.  At the same time, risks arise not so much from direct competitors, as from the emergence of new technological solutions, from changes in consumer behavior, in the appearance of goods and services – substitutes.
Exemplary is the fact of the disappearance of 88% of the companies from the Fortune 500 that existed there in 1958.  They were acquired or went bankrupt.  During this time, the average life cycle of a company has decreased 3.4 times from 61 to 18 years.  Research on the activity of mergers and acquisitions, and growth rates of startups with billions of turnover, allows us to make a forecast that in 2027 half of the companies listed today in the S & P 500 list will not exist.  To remain a large organization today for longer than fifteen years is a task of high level complexity.
In order to meet the pace of change, companies are forced to either modify existing products, adapting them to new needs, or go a radical way, creating fundamentally new solutions, on the platform of their own existing capabilities.  At the same time, the process of search and transformation should be permanent, and, last but not least, should be integrated into the company’s management system at the operational level.
In the above-mentioned study, the main problems were identified (Figure 1) that impede an adequate change in the company in response to the challenges of the market and the environment:

Figure 1
Problems of Transformation of Companies

The majority of respondents named the problems of operational strategy implementation and the lack of a consistent vision as the main problems, that is, problems of strategy formation and implementation.  But the remaining three groups of problems which amount for more than a third of the respondents are attributed to the shortcomings of the mechanism for generating innovation and supporting change.
Thus, the company’s ability to quickly and adequately respond to changes in the external environment is becoming increasingly important.  Such an ability should be intrinsic to the company itself, be its property and quality.  That is why the issue of creating conditions for the development of intrapreneurship in any large company making attempts to build long-term strategic development plans becomes extremely relevant.
Intrapreneurship as a phenomenon in the management of an organization in domestic science has been studied since the early 2000s.  At the same time, two concepts are in circulation – intra-enterprise entrepreneurship and domestic entrepreneurship.  We will focus on the term internal entrepreneurship, as more consistent with the goals and objectives of our study.  The founder of this concept are considered to be G Pinsho, who not only created the meaning of intrapreneurship, but also for the next thirty years until today, consistently developing the concept of internal entrepreneurship.
Most academic studies of the phenomenon of intrapreneurship were theoretical, with modest results in the applied field.  A survey by Italian scientists found that the academic point of view focuses more often on the reorganization of the company for the development of intrapreneurship. Management practices tend to view intrapreneurship as a temporary tool for innovative change that can be realized in the form of time-limited interventions.
The purpose of this study is to determine the characteristics of a company management system that effectively develops local business.  The practical result will be the identification of areas and key management tools for implementing programs to improve the flexibility and adaptability of the organization as a whole.

In the Russian publications on intrapreneurship, two different interpretations of this phenomenon are evident.  The first interpretation defines intrapreneurship as a property of an organization, and conducted by S Dondokov [6] and M Goryainov [3].  The second direction, to which we can relate E Puzikov [7], V V Negreev [2], continue the ideas of G Pinsho, interpreting intrapreneurship as a property of the company’s employees.
Dondokova defines intrapreneurship as an entrepreneurial activity limited by corporate conditions.  At the same time, it considers the interaction of business entities, creating synergy as a category of domestic entrepreneurship.   In the classification she created as a criterion for grouping, she uses the concepts of co-enterprise intrapreneurship along with internal business.  In addition to this, in the classification created categories of forms of business: organizational, venture and strategic, she took the program-targeted project groups, franchising, branches, subsidiaries, subcontracting relations to the forms.  According to the interpretation of this author, any kind of cooperation with foreign entrepreneurs is a form of internal, that is, limited, entrepreneurship.
The classification of forms created by Dondokova, in our opinion, is of great value, but their belonging to the phenomenon of internal entrepreneurship can only be determined by the fact of initiating them “from below” by employees who are not officially authorized to create such forms.  Thus, the form of economic activity is a mandatory but not sufficient condition for identifying it as an entrepreneurial one, since both franchising and target project groups and subsidiaries can be formed as a result of centralized strategic decisions.  Only the creation of them at the horizontal level as a result of the creative work of the company’s employees themselves appears the basis for classifying them as forms of internal entrepreneurship.
Analysis of the phenomenon of intrapreneurship as an employee’s behavior is especially fully carried out by Puzikova, which defines it as a special form of entrepreneurship.  Internal business is treated by it as the activity of workers-entrepreneurs in the framework of the existing enterprise, based on their initiative activity.  Based on this definition, the forms of intrapreneurship are divided by it into individual, collective, and common.
This approach is quite common in the scientific and educational literature.  In the textbooks on entrepreneurship [1] the main factor in the development of internal entrepreneurship.
Also, due to the lack of published studies, a decision in the form of a hypothesis was made on a leadership style that supports the “Internal Entrepreneurship” management system as an empowering one [9].  This leadership style creates the best conditions for the development of the initiative and the implementation of the ideas of employees.
The decentralization of the organizational structure in such a management system is due, in addition to the technology of business, to the scale of the development of entrepreneurial initiative in the company.  If technology and needs create the prerequisites for the development of a universal initiative, as it may be in design or advertising firms, the organizational structure should be decentralized as much as possible.  If business technology requires the preservation of divisions engaged in routine activities, the development of intrapreneurship is possible on the basis of the creation of special units of two types – research units or a “cultivation area”.
The first option, research departments (R&D), does not create truly innovative solutions, but rather encourages companies to improve, and optimize existing products.
The second option also does not require radical changes in business.  It allows you to create innovative development projects based on incubated ideas that have already proved their viability on a small scale.  This option requires the creation of a certain “greenhouse” zone, an “incubator” of ideas, in which new solutions are born, selected and grown [8].  Such an incubator will require the allocation of a part of the resources for its existence, but it will also be a certain guarantee of the company’s existence in a strategic perspective.  Traditional strategic planning based on experience, as well as on baseless managers, as a rule, does not allow companies to find breakthrough solutions.
It should be noted that the definition of intrapreneurship as a property of the management system involves the use of indicators of the level of expression of this property.  The main indicator of the level of development of domestic entrepreneurship can be the rate of innovation and flexibility in reformatting a business model.
The rate of innovation is defined as indicators of marketing properties: the share of product upgrades, market segments, the time from the appearance of the product idea to its market launch, and technological indicators: technology updates, and equipment.  In addition, the integrated assessment system can use indirect indicators of the growth of motivation of other employees, not intrapreneurs, loyalty. 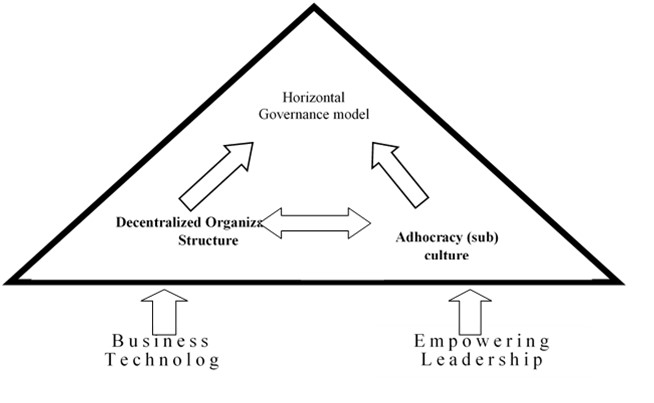 Intrapreneurship should be viewed as a modification of the organization’s management system, creating the conditions for identifying and growing innovators within the organization, increasing the speed and adequacy of its response to changes in the external environment.  Such an interpretation makes it possible to give the phenomenon of internal business a manageable and practice-oriented character.  Elements of such a management system are a decentralized organizational structure with built-in innovation support units, a horizontal management model, and an adhocracy culture supported by an empowering leadership style.
Elements of the proposed management system can be used in the practice of optimizing and transforming organizations in order to increase their flexibility and sustainability based on the development of innovative potential.  Changes to only one of the elements of the system, as a rule, do not lead to the desired results, as shown in a study by Innosight.  Only an integrated approach to the transformation and culture, and management model, and organizational culture, along with the appropriate type of leadership will lead the company to the desired result.