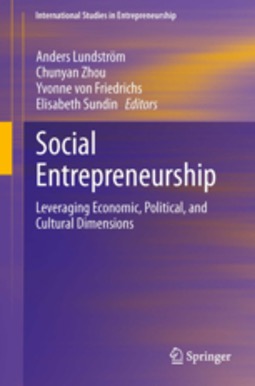 This book review is about the “Social Entrepreneurship: Leveraging Economic, Political and Cultural Dimensions” published in 2014, its concept relies in international approaches about social entrepreneurship in the point of view of the editors and authors, who are renowned professors, students, post-graduate, researchers and lectures of the following themes: social entrepreneurship, business administration and innovation.

This book objective is to address the implementation, the institutionalization and the future perspectives of the social entrepreneurship. To reach this objective, the editors organized the articles based on three dimensions: economic, political and cultural, with national and regional contexts, combining with the necessities of the commercial, social and human development.

The book was presented by the editors in four parts reported hereinafter, in addition there is a final exposé about the authors.

In Part II, referred as “Implementing Social Entrepreneurship”, are introduced the chapters starting at five to nine. In Chapter 5, entitled “Entrepreneurial Discovery and Asian Entrepreneurship in the UK”, whose authors are Spinder Dhaliwal e David Deakins. It describes entrepreneurial discoveries in the United Kingdom, illustrating eleven case studies of Asian entrepreneurs, demonstrating that the success of this group is based in the combination of superior technical knowledge with cultural characteristics, the role of Asian families and social networks in supplying resources, in the identification of opportunities and in business developments. Another success factor would be the role of the socio-economic environment and the role of the local political institutions.

In Chapter 6, known as “Corporate Social Responsibility in Family Versus Non-Family Enterprises: An Exploratory Study”, the authors, Giovanna Campopiano, Alfredo De Massis e Lucio Cassia, examined twenty-five enterprises involved with Corporate Social Responsibility (CSR) and aimed to identify the motivations in why they behaved in accordance with these principles and to implement socially responsible actions. To reach this objective, the authors developed a research framework to analyze the background of the socially responsible behavior of the enterprises and to study these actions, categorizing the motivations according with their economic and ethical finality. The first finality was to identify these actions which values the enterprises reputation in front of society and the second finality was to analyze the targets of social initiative and of environmental protection. The authors also studied cases of companies, identifying the behavior practices adopted by them and the nexus of coincidence between the motivation and the socially responsible actions. They also identified the four standard principles emerging in the business behavior that invest in social responsibility, they are: (i) explicit declaration of economic motivations, that increases profits derived from the increase in reputation; (ii) the investments in social actions destined to employees, for the enterprise to better its corporations image, recover its damaged reputation or attend to the necessities of employees; (iii) The aim of the social actions will be the society, demonstrated by the enterprises intention to take care of its stakeholders or when their activities prior harmed the company; (iv) the efforts of the social responsibility with the environment, when an enterprise explicitly announces its intention to protect or to restore its image after having environmental problems in the past. At last, the authors did an analysis of the motivations of CSR and the socially responsible actions in family and non-family enterprises and established the exempt attention to the community and to the employees, they were taken to better their reputation.

Now in Chapter 8, known as “Developing Entrepreneurial Self-Efficacy and Intent”, Jess Co and Sarah Cooper has the objective to determine whether entrepreneurial self-efficacy in students is developed in students participating in a social enterprise module and how this affects their career intentions. The authors affirmed that the students developed abilities and knowledge, which will help them as entrepreneurs but also turn them into valuable employees for any kind of organization. The results also point out that experimental learning provides to students, opportunities of concrete real-life experiences, supplying contexts of active experimentation. However, the study showed that only 42,9% of students that attended the module of social entrepreneurship has the intention to create your own enterprise. Therefore, the authors concluded that the abilities and knowledge to build efficient and innovative social ventures are each time more requested, and courses that help to develop these knowledge and to encourage attitudes for a social economy, has an important role to perform in the construction of a diverse economy.

In Part II the last Chapter, number 9, is titled “How Can a Health-Care Business Acheive Strategy Elasticity in a Crisis Environment?”, the authors Jarmilla Sebestová e Thomas Cooney examine how the health-care business in Czech Republic can achieve strategic elasticity in a crisis environment. The authors reveal that if a small organization and its owner is not a skilled administrator the risk level rises. The study also highlights the tendency for static decision-making and for market exit.

The Part III: “The Institutionalization of Social Entrepreneurship” is divided in three chapters: Improving Entrepreneurial Competency in Low-Income Segments: The Impact of Entrepreneurial Development Agents by the authors René Díaz-Pichardo, Nicolás Gutiérrez and Juan Arriaga-Múzquiz; Entrepreneurship in Society: A Review and Definition of Community-Based Entrepreneurship Research by Anne Pierre, Yvonne Von Friedrichs and Joakim Wincent; and The Rise of Social Innovation Parks by Chunyan Zhou and Anders Lundström.

In Chapter 11, titled “Entrepreneurship in Society: A Review and Definition of Community-Based Entrepreneurship Research”, the authors Anne Pierre, Yvonne von Friedrichs e Joakim Wincent presents a revision of definitions about community-based entrepreneurship and emphasizes the necessity to improve the studies about this type of entrepreneurship, characterized by a set of personal characteristics and focusing in practices and political regions. And in the final part of this chapter, there is a list of themes based on previous research with the intention to facilitate the knowledge construction and awaken the interest of researchers in the research fields less explored.

Finally, the last Chapter of this Part, named Chapter 12 – “The Rise of Social lnnovation Parks”, the authors Chunyan Zhou and Anders Lundstrõm demonstrates that the social innovation parks (SIPs), like emerging institutional phenomenon’s, involving government agencies, non-government organizations (NGOs), non-profit organizations (NPOs), support institutions for social business and social entrepreneurs, and so on. This chapter argues that the SIPs have different forms of action, depending on your strategies, your owners, your sponsors (investors) and your functions performed. A social innovation park can be initiated by universities, government agencies, NGOs, philanthropists and sponsors. These SIPs were defined not as destinations to develop new technologies, but to work with new ideas and to create new structures in areas like schools or health systems. The business of SIPs is to rethink the existing structures and giving suggestions for new structures that will be capable to resolve future demographic and social problems. A SIP – “Social Innovation Parks” – can be a non-profit or a profit-seeking entity, totally or partially detained by an entity related to a university, a governmental agency or a private company. The main mission of SIP is to commit to building different types of networks. This chapter explores viable forms that SIPs can take on and the role of governmental and regional organizations in its development, besides revealing the possibilities presented by SIPs in the resolution of problems in different sectors of society, including ideas for the future systems of schools or the health sector.

The Chapter 13, the authors analyzed the gender in the spheres where social entrepreneurship operates – social assistance, state of welfare and the third sector. It was stated that in all types of entrepreneurship, be it traditional or commercial, the male gender still prevails over the female gender. In this chapter, it still is prominent that social entrepreneurship data and its relation with the gender are a little dispersed by being an emerging field, therefore the objective was to verify what is available in the academic environment and identify future research necessities.

In the end of the book, the editors wrote about the professional and academic experience of the authors that contributed in the elaboration of this book and that were important in de development of the theme.

In conclusion, this book is a great opportunity for readers to learn about different typologies for analyzing the theme “social entrepreneurship”, combining the economic, political and cultural dimensions, in national and regional contexts, with the needs of commercial, social and human development. National and regional approaches take into account local cultures, inducing the reader to reflect on different approaches to observing the topics to be analyzed. On the other hand, it shows the theme of “social entrepreneurship” linked to social policies and their respective impacts on economies.

In addition, a review of theoretical concepts on “social entrepreneurship” demonstrates the scope of the subject and its impacts linked to the theme, suggesting new concepts to be researched.

Several case studies of companies are also presented, in different continents, where convergent examples are pointed out according to the solutions adopted for business development.

The authors report that the skills and knowledge to build innovative and effective social enterprises are increasingly in demand, and courses that help persons to develop skills for a social economy, have an important role to play in building a diversified economy based on the social economy.