The THA Greece facilitated an international training on research methods for Circular Economy in the Agrifood sector which took place during 18-20 February in Thessaloniki, Greece at the South East European Research Centre. The training was organized under the umbrella of the PROCEEDS project (H2020/MSCA) and hosted a number of 35 researchers from UK, Italy, Argentina, Poland and Greece both in person as well as online. As part of the training, a key aspect which was highlighted as a true enabler of the transition to circular economy comprised of the multi-stakeholder engagement process. To this end, the role of the triple and quadruple helix collaboration for circular economy goal alignment becomes of critical importance. The researchers were presented with various scenarios of triple/quadruple helix engagement options at the regional level as well as the impact that such collaboration has on policy making and policy implementation.

In parallel with the training, THA Greece provided multi-stakeholder support to the South East European Research Centre in terms of organising a multiplier (dissemination) event for the DIGI-GRENT project (digital and responsible entrepreneurship) which is in line with the promotion and support of sustainable business models. Quadruple helix actors were engaged in co-creation and discussion on the DIGI-GRENT outputs (progress version of the curriculum, VLE, multi-stakeholder co-creation toolkit).

On 19 December 2019 the South Asia TH Chapter (SATHA) organized a one day policy seminar on “Golden Ring Economic Bloc for National Economic Security”  at University of Management and Technology, Pakistan in collaboration with Golden Ring Economic Forum. The key partners in organizing this seminar also include the Economics Department of the School of Business and Economics. The moderator was also selected to be from the same faculty, Dr Farhat Rasool, while the speakers being from distinguished departments playing important roles in the field of economics.

The seminar began with recitation of Holy Quran following with a welcome note from respectable rector UMT, Dr Aslam, and President Golden Ring Economic Forum, Mr Hasnain Reza. After which the respectable speakers spoke on the issues that could arise in the Golden Ring Economic Bloc and how Pakistan will play an important role in driving the entire economic cycle. Respectable DG UMT, Mr Abid Shirwani, concluded the event by thanking the participants. 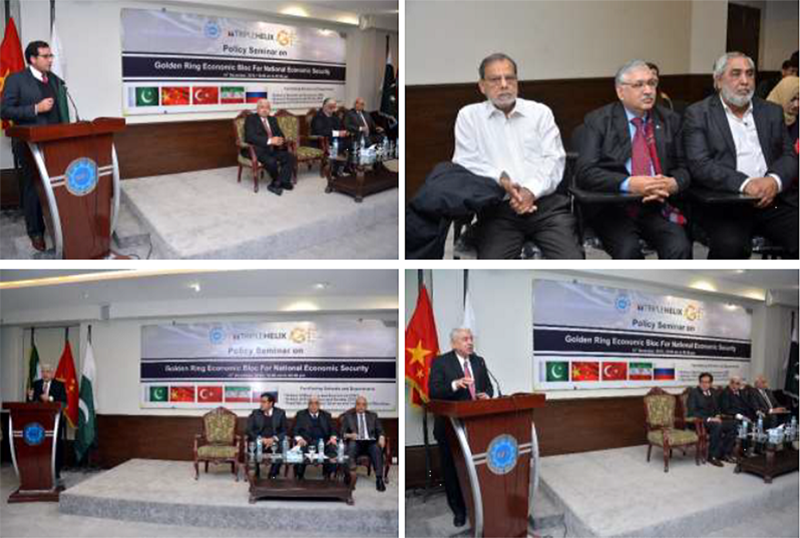