While the Summer is almost over, the whole world is still struggling with the uncertainties of the coming Fall. Will we be able to contain the pandemic? Will we be able to learn from all the disruptions experienced in these past months? Will we join forces and overcome individual weaknesses? Will we be able to generate a response proportionate to the threat to our societies and everyone’s health?

These are only some of the many big questions that characterize the public debate and that were impossible to foresee when the Triple Helix Society programmed the 2020 Summit and decided to locate it in Bologna, in the heart of the Europe of Innovative Regions. It came naturally back then to define the theme of the Summit as centered on the role of regions as critical, innovative ecosystems but stressing the importance of making them an integrated piece of a more extensive web of global connections. “Designing globally connected regional innovation ecosystems: overcoming barriers and opening pathways,” therefore, became the driving title of the now forthcoming Summit. Bologna is the capital of Emilia-Romagna, one of the most innovative European regions. Its companies operate in several industries mixing world-renowned global brands like Barilla or Ferrari, and a wealth of SMEs which have long been studied by scholars from all over the world as examples of integrated local networks. The University of Bologna, with its over 900 years of history, is the largest and most reputable component of a rich system of universities and research facilities. The regional government has consistently developed collaborative innovation policies to combine competencies and resources coming from companies, universities, and all local stakeholders. The recent decision to move from Reading to Bologna, the European Centre for Medium-Range Weather Forecasts, opened up a new development path based on supercomputing and data analysis. The place seemed just right to continue the THA Summit habit of mixing local specificities with global trends.

While washed away by the stormy waters that we are currently navigating, this intuition and the themes chosen to articulate the contributions from policymakers, scholars, practitioners, entrepreneurs, and managers are still a robust compass pointing into many relevant unknowns to facilitate new discoveries.

The first theme, centered on boosting sustainable development through smart partnerships, is at the core of a public debate that gained additional momentum during the current crises. The Recovery Fund developed by the European Union emerged after long days of negotiations among the leader of its countries. It has the ambition of both supporting its troubled economy and catching this opportunity to make Europe greener, more inclusive, more respectful of natural resources. At the same time, it recognized that money wouldn’t suffice in the absence of proper engagement of industry, government, universities, and society at large.

Building and growing regional innovation ecosystems through industrial specialization and collaborations is the second theme of our Summit. Thanks also to work done over the years by the THA, we now observe in different parts of the world wiser leverage on local specializations, rather than a rush to replicate the same development model everywhere. The pandemic has shown once more why this is key to overcome grand challenges. It is comparatively more efficient and effective at a global scale to combine the different excellences in the many areas needed to contain the virus, rather than replicate everywhere the many components required. And yet, the classic not invented here syndrome couples with a race driven by a misplaced national pride which carries all the inefficiencies typical of patent races. Taken together, they risk undermining the importance of combining specialization and collaboration.

Stakeholders’ engagement and social innovation practices in regional ecosystems and their crucial role in promoting healthy circular economy responses are the third theme of the Summit. As for all the others, we can see the influence that the current emergency could bring in our debate. Moving towards different economic paradigm, as recalled both last august and a couple of weeks ago by various initiatives led by highly visible global corporations, is not easy without a proper and distributed engagement of all parts of society. Many Governments had learned the lesson the hard way during these months when lock-downs and draconian limitations of freedom and rights were strongly opposed. Or when the typical development of the scientific debate moving through trial and error deduction was forced to follow the immediacy required by digital news. The larger the group, the harder its proper engagement and local ecosystem could offer a unique opportunity to develop and combine both top-down and bottom-up initiatives.

One specific way through which local ecosystems could be more engaged is through new digital technologies, and in particular, through big data, distributed sensors, and artificial intelligence. This is why we selected the topic as the fourth theme of the Summit, and the pandemic brought many concrete examples of what we had in mind, albeit applied in a different context. The excellent results obtained by countries like Taiwan, South Korea, and more recently by China in managing the contact tracing during the most severe months of contagion have inspired many others. The increasing higher level of efficiency in the early identification of new cases and the localized approach in managing outbreaks with distributed testing is becoming the norm. The development of several new sensors at the plant and office level generated new products and services to cope with the needed precautions for the workforce. Many other examples will converge from the Summit contributors to help us all learn more generally about the power that people and technologies can unleash.

The stories of the role played by Universities during these months are countless. They leveraged their reputation to provide certainties while debunking. They opened up their lab to serve local communities and global science. They launched hackathons and idea contexts to offer the world new products and services able to fit the unexpected needs developed during these months. At the same time, however, they have endured in a long-term effort, because when the emergency will be over, many of the challenges that we faced back in December 2019 will still be there, and new generations will demand high-quality education. Precisely the one that science needs to advance to prepare for the next unexpected. Our fifth theme, “Global and local impacts of entrepreneurial universities,” is, therefore, even more, timely than when we included in the Summit.

As we wrote in the call published on “…feeding an ever-increasing population healthily and sustainably, providing the energy needed to propel the daily life of billions of people, generating the resources needed to guarantee equitable growth for everyone are grand world challenges that need to be tackled on a global scale.” We need to find a new balance between urban development, leading to a seemingly unstoppable race towards megacities and a more significant role for rural environments. The last scenes of the 2011 movie “Contagion” combine in a short sequence all the elements that we have learned to fear during these months: the violent appropriation of nature motivated by greed, rather than need; the indirect consequences of animal-to-human contact; the difficulty of tracing the “real” cause, and the consequential easiness to generate several blaming options; the unpreparedness of a global response; the many contradiction of our fully connected societies. When reality almost catches the fantasy of a screen-player, it is time to take those matters seriously. Our sixth theme will offer us an opportunity to bring about ideas, experiences, and energies able to provide insights with and design new solutions to overcome an unbalanced development between urban and rural communities.

All six themes can and should help us develop a Summit able to offer its contribution to the hard times that the world is experiencing. As we wrote, this can’t be done in isolation. It is, therefore, particularly important that we work to cross geographical, intellectual, and professional borders. This was, is, and always will be the spirit of the THA, and we are all looking forward to engaging with you during the 2020 Bologna Summit. 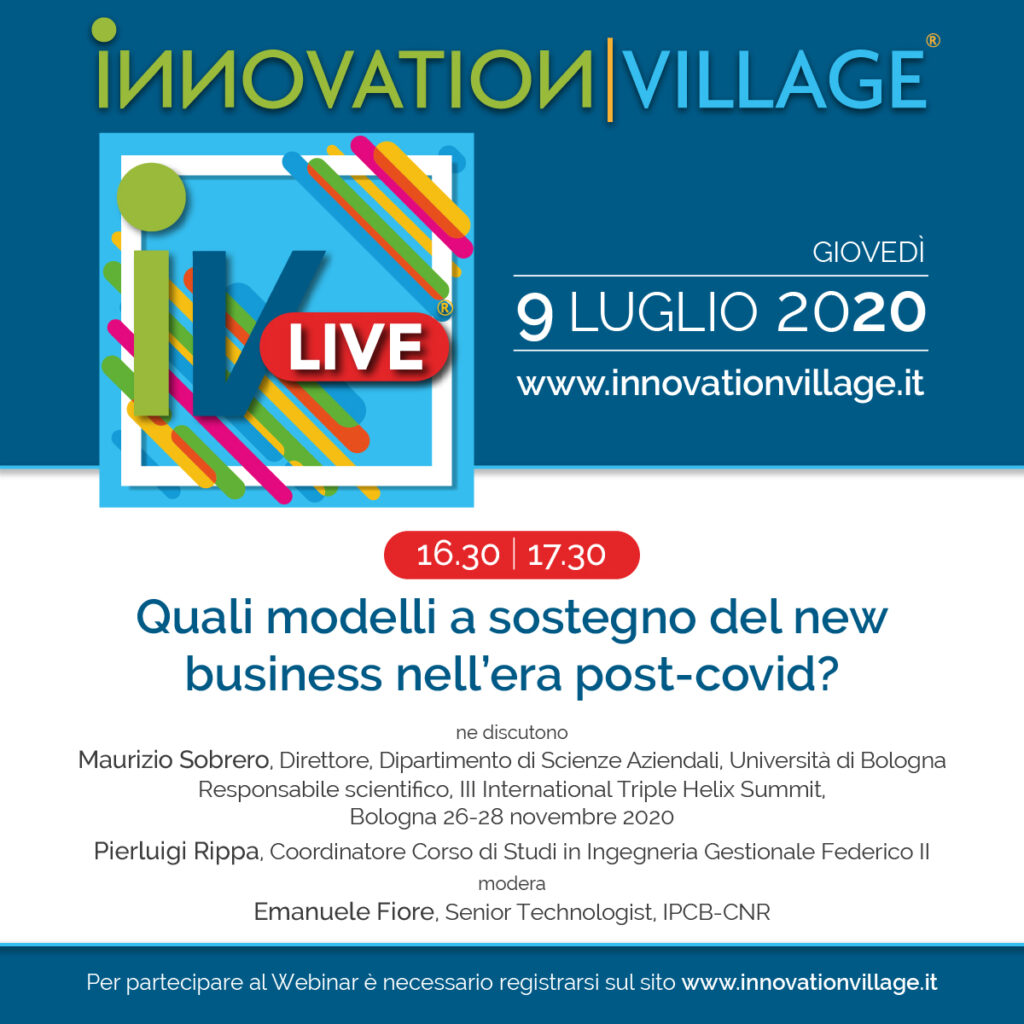 The webinar was intended to introduce the theme of the upcoming III International Triple Helix Summit, “Designing globally connected regional innovation ecosystems. Overcoming barriers and opening pathways”, where global leaders from academia, industry and policy will discuss how to build and grow regional innovative ecosystems to tackle world grand challenges!

Here the video-recording of the webinar (In Italian)