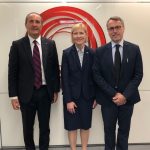 The Director of the International Mixed Unit between CNR and University Laval for “Chemical and Biomolecular Research on Microbiome and its Impact on Metabolic Health and Nutrition” (UMI-MicroMeNu, www.umilaval.cnr.it), Vincenzo Di Marzo, of the ICB-CNR, and the delegate of the President of the CNR in the UMI Steering Committee, Emanuele Fiore, of the IPCB-CNR, met today in Ottawa with the Ambassador of Italy to Canada, H.E. Claudio Taffuri, and the President and CEO of the Canada Foundation for Innovation, Dr. Roseanne O’Reilly Runte. Both the Ambassador Taffuri and Dr. O’Reilly Runte praised the work carried out so far by the UMI-MicroMeNu and the model of interaction between Research, Institutions and Industry that it exemplifies, and assured their support for its future initiatives, starting with the participation, in person or by their delegates, in the meeting scheduled for August 29 in Quebec City, during which the coordinators of the 9 bilateral projects between University Laval and the CNR, co-funded by the UMI, will be officially presented. The meeting will also aim at exploring the possibility of participating in future European projects within the next Horizon Europe 2021-2027 research program.